This movie was a perfect example of how the graphic novel or original source is superior than what’s on screen. It came out with a whimper of excellence with Zack Snyder’s amazing visuals and breathtaking scenes of extreme violence and details of what the novel was all about. These are my thoughts of the pros and cons of this movie and if the hype lived up to the infamous reputation of one of the best novels of all time (in my opinion of course).

Basics: The intro. That was really awesome. Also the opening scene was kick-ass.

It’s all about visuals with this movie and Zack Snyder did not fail at that, presenting a exhilarating cache of momentous action sequences that he’s known for from his previous movies (300, Dawn of the Dead). Alot of people complained about the music but i thought it was perfect for when this story takes place (70’s-80’s) but there are problems with this but i will talk about that in the CONS section. The acting was good but three roles stood out for me, Jackie Earle Haley as Rorschach, which was one of the best performances of the movie, or even in a graphic adaptation, using the grotesque images of his past and erratic use of crime fighting to send chills down your spine but it’s very amusing to say at least. Jeffrey Dean Morgan as The Comedian was also great, portraying the brutal, brazen character he is, including some scenes of this movie which are hard to watch, shows how enmity plays into the role of this person and is never afraid of using his inveterate actions throughout the film. Matthew Goode as Ozymandias was the ultimate villian, using his superior intellectual ideas to fuel his corporation, Veidt Enterprises. He uses penchant relations with ancient Egyptian history to connect with his daily meticulous plans of rising to the occasion, even with consequences. I also like the changes in the ending, because if used in this modern era, it will look retarded (many would disagree though, which i respect).

I have a few but as i said eariler, the music was excellent but it was used in the wrong scenes of the film. Especially having “hallelujah” in that sex scene which was really awkward but interestingly meaningless. While Zack Snyder has used the slow motion gimmick with a breeze, during the action scenes, it gets really tiring and incomptent, which this film doesn’t really need. It was like he needed to use that to grab that ‘awe’ factor but it was a fatal flaw for me personally. Also the sex scenes were way too long, again this is a Snyder gimmick in his previous two films but it amusing nothing less (lol). As for the disappointing performances, Dr. Manhattan takes the cake. It was really weak and Billy Crudup didn’t really fit the role for this character. Malin Akerman as Silk Spectre II (although sexy) was really obtuse and may would agree, she was the weakest performance of the film but Snyder probably got her because of the X-Factor of her beauty but not the essential part of ‘substance of acting’.

Overall, this was a strong showing of how Watchmen can be portrayed on the silver screen. Zack Snyder used his amazing visuals to represent as if the novel went alive, as the effects helped with this making it possible. The changes he did of the ending was understandable and it was actually better that he did that in this film. Most of the performances were strong, leaving the audience with me during the showing appreciated, even people clapped after the film ended(probably were fanboys lol). I will definately get this on Blu Ray when it comes out, including if there is a longer cut of the film, which will be interesting what Zack and Co. left out of the original theaterical release.

8/10 – A ‘beautiful disaster’ of a film, with more beauty than the latter. 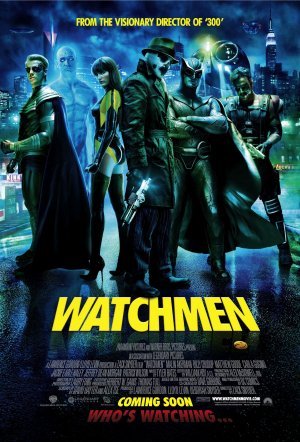