In the months leading up to the May 8th release of Star Trek, the producer and writers of film have been releasing a mini-series of comic books titled “Countdown.” The purpose of these four comic books, published this month as one graphic novel, is to the bridge the gap between the last Star Trek film, Nemesis, and the new film. My full review including some minor spoilers after the jump.

The thing that surprised me the most about the graphic novel is how short it is. It’s less than 100 pages long, and at least 10 of those pages don’t have any story content. I can’t even image wasting money on buying each of the 4 chapters separately. That being said, Countdown does tell a full story and is not just filler for information.

The plot centers around a strangely powerful star in Romulan space that is about to go Supernova and eventually destroy most of the galaxy. Romulus is in the most immediate danger, so Federation Ambassador Spock sees the Romulan Senate about using a valuable Romulan mineral to create a blackhole in the center of the star to neutralize the threat. In a truly Kryptonian fashion, the Senate disagrees with his analysis and the use of rare resources, despite the plea of Nero, the captain of a mining ship that has seen the destruction of the star first hand. With the Senate not willing to do anything, Nero and Spock covertly go to Vulcan to obtain the other key to neutralizing the star, red matter, which Vulcans have been secretly working on. However, the Vulcans don’t wish to allow Romulans, their enemies for centuries, to have knowledge or access to red matter, despite its importance in saving even their own planet. 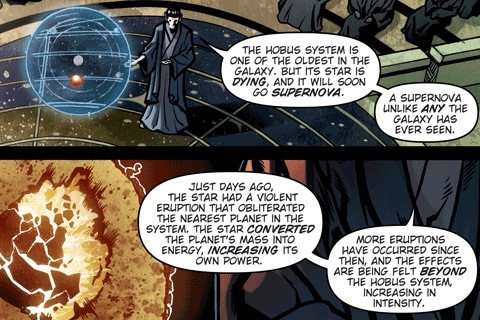 The rest of the story unfolds with Nero taking a turn for the worse and Spock working with some of the famous Next Generation characters. Data, Picard, La Forge, and Worf all make appearances. The story definitely does what it’s supposed to. It explains pretty well how Nero turned bad, why he looks the way he does, and (to a certain extent) how and why he and Spock travelled to the past. I won’t give anything away, but I was surprised by how the time travel part played out.

On the plus side, the story is interesting, definitely gives some depth to our antagonist Nero, and it’s always great to see your old favorites back, even it’s only on paper. However, while the artwork is very detailed (which is expected), it’s rather dark. That made it hard to see some of the space battles and important technology used. It does feel like they are throwing in some lines about past adventures and characters just to prove that the writers know their stuff, but the familiar characters are portrayed pretty accurately.

Overall, it’s worth the read, especially since it appears that the film will be entirely in the old generation (assuming it doesn’t crossover with the novel), so we may never see the full picture as to how these events came about.

My grade: B+
Comic BookCountdownNemesisStar Trek