How The Iron Man 2 Photos Are Connected

Recently, the first image of Mickey Rourke as Whiplash/Backlash/Crimsonson Dynamo (I heard it’s a mix of all three). After a mountain dew fueled journey through the mind via the music of The Allman brothers, I noticed something. The two photos are connected.

Take a look at the first image. 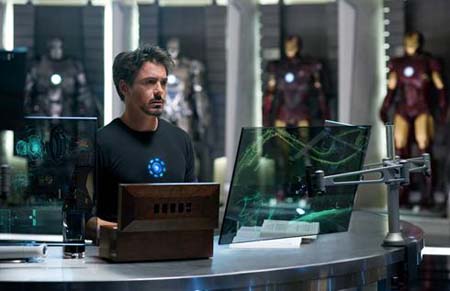 Look, at his computer screen, and the expression on Stark’s face. He is obviously pissed off. Now back to the screen, the pattern on it looks strangely similar to the Monaco Grand Prix (Stark is too high class for Talladega). Finally, lets have a look at the latest image. He’s definitely at the Monaco Grand Prix. He seems to be wearing a track official’s uniform (As you can see another person with the exact same clothing in the background wearing a helmet) So this is apparently the ‘unveiling’ scene.

Is this just a coincidence, or some very smart semi-viral? Discuss.