Two photos from Iron Man 2 have been floating around the internet for a while now. 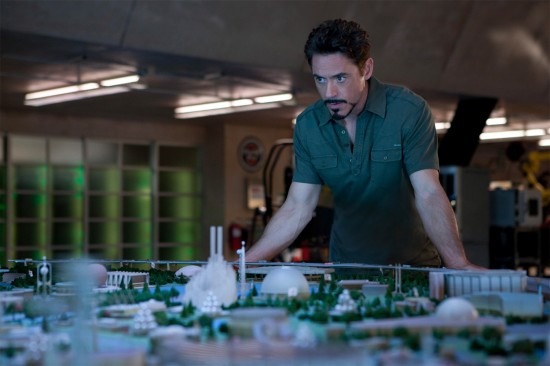 The first photo, seen above, features Robert Downey Jr. as Tony Stark looking at a full-scale model version of the Stark Expo, from a scene which has the following description:

“Tony is looking down at a scale model of the Stark Expo, which closely resembles the New York World’s Fair Pavilion. This included a Unisphere at the center of the convention. As the camera panned from the level of the model towards Tony looking inquisitive at the Stark Expo, he spoke to himself, “The key to the future is…where?”.”

There was also another scene witnessed where Tony was looking further into the pavillion in the Expo, and reconstructing “the main pavilion by enlarging and relocating structures with his hand motions,” with the help of Jarvis (who you’ll remember from the first film as Tony’s robot helper).

There is speculation that a central plot point in Iron Man 2 deals with Tony delving into his father’s past, mainly the Stark Expo, which might just “play a major role in the energy crisis, which is a chief issue in the film.”

Now, onto the second photo: 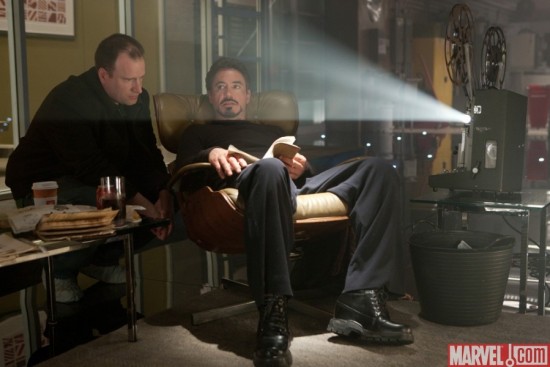 This photo features Kevin Feige (the producer of Iron Man 2) talking to Robert Downey Jr. in what looks to be a break between shots (or maybe it’s a brief cameo, never know…but in between shots seems more likely).

Special thanks to /Film for the heads-up.