Fellow viral fans, we have a new campaign to follow…Gentlemen Broncos! The third film from Napoleon Dynamite director Jared Hess, Gentlemen Broncos tells the story of a high school writer who submits an original work to a contest only to later discover it has been plagiarized by famous writer Ronald Chevalier (Think Uncle Rico with books). Fox Searchlight has posted three viral websites, all centered on Dr. Ronald Chevalier. Played by Flight of the Concords star Jermaine Clement, it looks like Dr. Chevalier is being marketed as the main attraction.  Here’s a rundown of the viral campaign:

I would suggest going to Dr. Chevalier’s homepage first because it gives background information necessary to grasp both the viral and the film. His main page has viral videos on his written works, a biography, and photographs. In addition, if you submit your information at his contact page, you will join his mailing list. This also appears to be the central hub for news about the other viral sites, so if you only go to one page, make sure this is it. 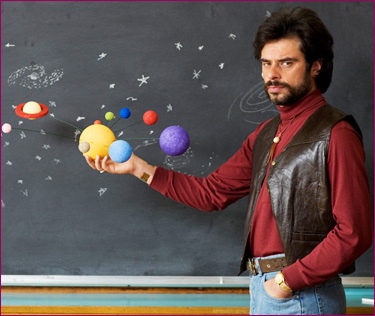 The next viral gives visitors the chance to “Enter the Mind of Ronald Chevalier.” Set up a webcam and print out a “marker” and your minds will be “joined as one.” What exactly does that mean?  It’s hard to explain. In all honesty, this is one of the more bizarre viral sites I’ve seen, and you’ll be best served by checking out the page for yourself.

Finally, the most recent viral is another Chevalier site that asks visitors to submit “SciFaiKus.” The contest is an attempt to combine the character’s science fiction background with his “expertise” in all things poetry and literature (as evidenced in the trailer). Need motivation to write a solid haiku? The best three entries will be read by Dr. Chevalier himself at the film’s world premiere on September 24th.

And as is almost always the case these days, Twitter is involved! You can follow Ronald Chevalier at @ronaldchevalier.

So what does everything think? Did you even know this film was coming out? I suppose if you’ve seen the Frankie Muniz epic Big Fat Liar, the film’s premise is nothing new, but I’m sure Hess will inject enough offbeat comedy to keep it original (if you call three movies with the exact same tone and comedy original).  Considering this, while it’s not the most interesting viral I’ve experienced, I give them credit for originality thus far. Leave your comments below!