When you were watching District 9, what was your favorite part? For some of you it was when Wikus took control of the Exo suit and led Christopher back to his son. For others it may be when Christopher and his son began ascending to the mother ship; personally, my favorite part is when Wikus and Christopher raided the MNU headquarters and then fight their way out. But all these scenes have something in common: they have designs that were made by District 9 lead designer Greg Broadmore and Weta Workshop.

Greg took some time to answer a few questions for us. We discussed his work and even the possibility of a District 9 sequel; take a look.

MovieViral: How closely did you work with Neill Blomkamp? And did these designs come from Neill’s mind, or was it more a collaboration between him and you guys at Weta?
Greg Broadmore: It was both. Design is always a two way street as you offer visual solutions to a verbal set of ideas (which can be really defined or really loose depending on the director) and you go back and forth, offering ideas and adjusting them with the feedback you get.

I would work with Neill on a pretty much daily basis while he was in New Zealand, and Neill is a guy who usually knows exactly what it wants, so it makes things pretty easy. We have, I think, a pretty similar design aesthetic, so it was easy to translate what he was asking for into design that fit the brief.

Neill is pretty different from most directors in the sense that he’s an accomplished artist and designer in his own right. I think he’s one of the few guys who could probably design and make his own film entirely himself if he only had the time.

MV: How much of an impact did the location this film was shot in (South Africa) play a roll in your designs?
GB: The South African setting and the fact that the aliens had been on Earth for more than twenty years affected the design a lot. It meant that the designs we built had to feel grimy, old and badly looked after. I made the Mothership feel as if it had been floating over Joburg for years – sun bleached and de-constructed by MNU, and the weapons were dirty, scuffed and covered in dirt. The guys on set like Joe Dunckley added to this even more.

MV: Are you surprised by the success District 9 has had so far? Some people are calling it the best film of the summer, or even the year. How does it feel to have worked on something like District 9 (meaning a “surprise hit”)?
GB: I don’t know if surprised is the right word. I feel really gratified by it’s success. I knew that this film would be different, feel different. From the moment Neill said he was Making Alive in Joburg as a feature, I knew, we all did, that it would stand out.  This was a film I really wanted to make, and surprisingly, that doesn’t happen too often and I get paid to draw monsters and robots!

Films like D9 don’t come along that often. And that’s all credit to Neill. He’s helped to bring back, in my mind anyway, what made Sci-fi so great when I was growing up, and that has mostly been lost in the last ten years.

But I suppose I had no idea if it would be commercially successful. So in that respect, I’m more heartened than anything else – It seems that other people agree with me!

MV: The weapons used in District 9 are just awesome. How many different weapons did you design for the film, and what’s your favorite one?
GB: I must have designed 10 or more different weapons, not including the Exo suit.

Only about 6 or 7 of those made it on screen. Some weren’t even weapons, they were tools, but they were intended to be used to…hurt people…

My favourite is tricky..the Arc gun is pretty good..but my favourite weapon is actually one that only gets seen in the background of a shot. it’s a cut down SMG version of the Assault Rifle (the long gun with the linear accelerator canisters arrayed down the side) 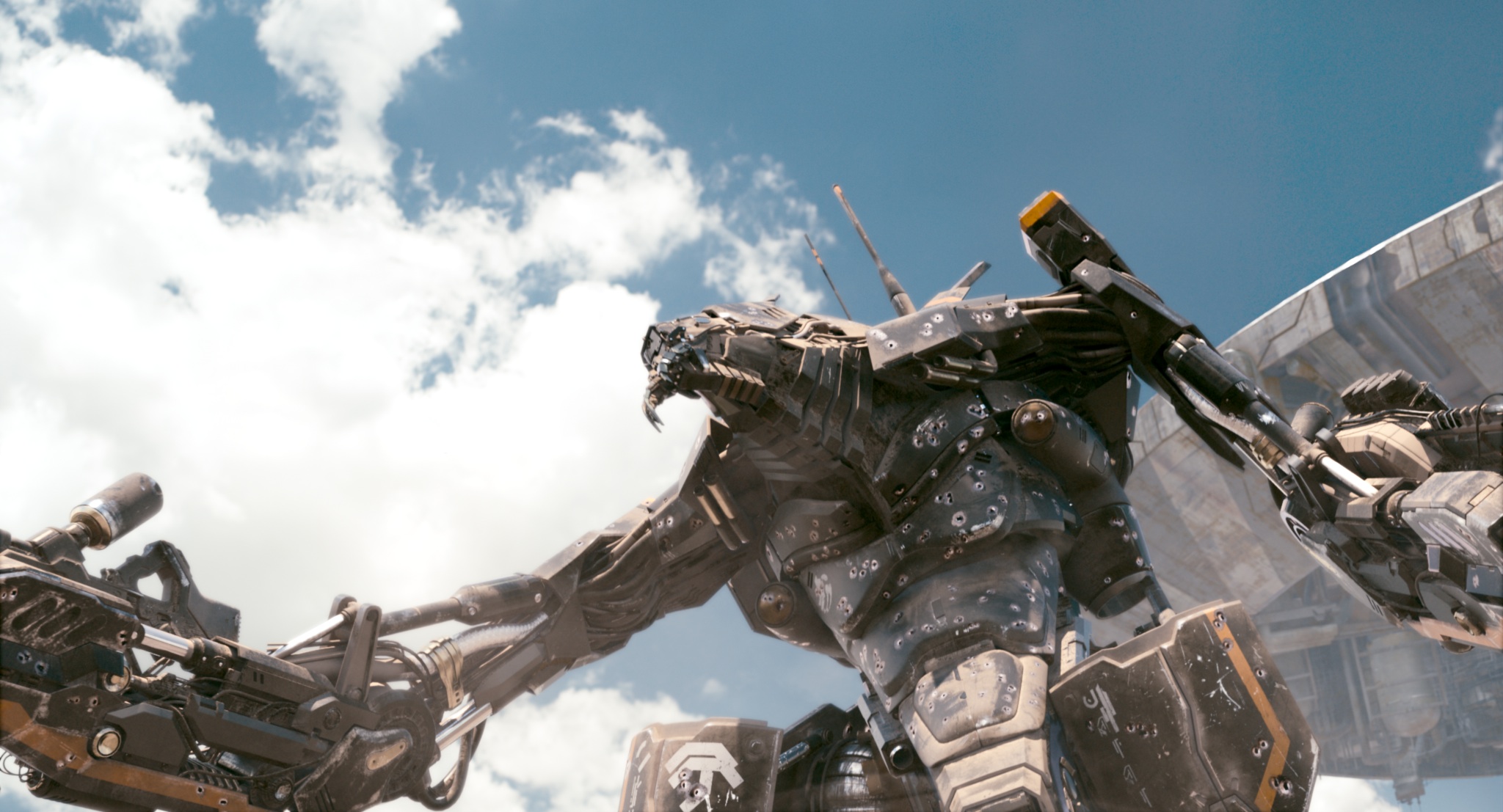 MV: You designed the exosuit for District 9, how did you create something so fantastic? I guess, what was the main concept behind it – was it supposed to be scary, realistic or what?
GB: The Exo suit was designed twice, built once as a real full scale prop but was cut from the film. That design was more organic, athletic…. Neill decided he wanted something more powerful and robotic. I designed the version in the film in about three weeks. That’s not a lot of time to resolve a design like that. I really liked the first design, but I’m even happier with the Exo in the movie. It was definitely intended to be scary, menacing, heavy, like an alien tank. I wanted it to be animalistic, and convey a little of the alien physiology. That’s why it has the mandibles which are analogous to their facial features.

MV: How detailed did you design the mothership? Meaning, did you actually do blueprints and stuff like that, or did you just do the basic concept?
GB: The Mothership is more or less what you see in the sketch. I did a rough top view and there were probably 5 or 6 more iterations than the one you’ve seen (not too mention the dozens upon dozens of early concept paintings from myself and other Weta artists). The painting is pretty detailed, but a lot of the detail is just inferred. Embassy VFX built the model from my painting and under Neill’s direction fleshed it out incredibly. Weta Digital then layered yet more detail on for the close ups.

MV: When you look back on the movie and your designs, is there anything you’d like to change or regret not changing?
GB: Hmmm, no, not really…  There is always more you can add, and there are ideas that weren’t able to be realised because they weren’t integral to the story ( and an a effects film of this budget you can’t afford to render all the ideas to screen)

So no, I’m pretty impressed with what made it to the screen

MV: Obviously you did a lot of concept drawings for this film, will we eve see the used – and unused – concept art for District 9?
GB: I’d love to make that possible. I did many ‘graphic novel’ illustrations for the pitch package, and hundreds of design illustrations that all built towards the final film, and on top of that there are hundreds upon hundreds of digital paintings, sculptures, photos of unseen props and costumes that I’d like to see in a concept art book. A lot of Weta artists contributed to the whole of the design work and it’d be great to give people a little insight into that. We’ll see what happens.

MV: And of corse I’ve got to ask. Have you been approached about, or heard anything about the possibility of a “District 10”?
GB: To be honest, I’ve heard as much as you have. In some of his interviews, Neill’s mentioned that he’s open to the idea, and the film certainly left the door open. So we’ll just have to see.

That concluded the interview and our thanks go out to Greg Broadmore for taking the time to do this. Make sure you check out his blog at gregbroadmore.blogspot.com.