What If: Back to the Future

In 1985 Robert Zemekis delivered a solid gold hit with Back To The Future. It followed the story of Marty Mcfly, who is transported back to 1955 in a time machine built out of a DeLorean, thanks to its flux capacitor.

The film was an instant success, spawning 2 sequels and a cartoon series. It also produced a star of the period in Michael J Fox, at the time for his role in Family Ties, and gave us one of the coolest cars ever to be seen on the big screen.

In the film, Marty escapes terrorists in Dr. Emmett Brown’s Delorean time machine by accidentally driving at the required 88MPH and goes back to 1955 where he meets a younger Brown, played to perfection by Christopher Lloyd, and his parents in what results in a near-weird inbreeding shocker!

The film took 100 days to shoot and suffered a miscast, with Eric Stolz hired to play Marty due to Fox’s existing commitment to Family Ties. It was decided that Stolz was not what they were looking for and the rescheduled the shoot to suit Fox. Michael endured a rigorous shooting schedule, filming Family Ties during the day, and then heading straight over to Back to the Future to work there at night. Fox averaged 5-6 hours sleep a night during shooting.

The film went on to become the biggest film of the year and was voted into the American Film Institute’s 10 best science fiction films. An Eighties classic, this was my favourite film when I was younger and has the critical acclaim to earn its place in the “What If” series.

The first site will be a website for a Libyan nuclear power station, tying into Doc’s “procurement” of the radioactive plutonium required for the DeLoreans flux capacitor to work. The site will include information of the fictional nuclear station and will as well as a virtual walk through of the station. The station will be open to tourists and will include pictures of guided tours offered by the station.

The eagle eyed visitor of the site will see Doc Emmet Brown in the tour pictures. There will also be a “staff only” section which will have password protection for which 2 sets of 3 digits would be required. The password would be not available straight away, but will be provided later on.

One of the most iconic movie cars ever, it is only right that the viral should tie in with the cars doomed manufacturer. A flash site, the race to 88 will feature Doc Browns case notes of converting a DeLorean to “travel” longer distances than previously thought possible. It would show diagrams of the modifications made to the car and would also include diagrams of the Flux capacitor. By pointing on the three ends of the flux the user will get access to pictures of the DeLorean in all its travel glory. 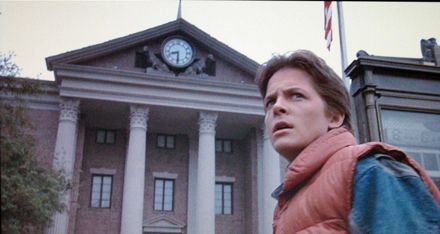 The save the clock tower site will be website explaining the events etc taking place to save the Hill Valley clock tower.

It will include the back story of the clock tower explaining how it stopped working in 1955 and has never worked since. By referring to the date, this will lead the inquisitive reader to look at the year book of stage 4’s website.

One of the events being held will be the “Enchantment Under The Sea” dance, being held as nostalgic event to raise money for the cause, marking the anniversary of the day the lightning bolt struck and again, making the user aware of the significance of 1955.

A mock site constructed for the school that is featured prominently in the film, Hill Valley High’s website will be featuring a special 70th Anniversary theme, celebrating the fictional schools 40 years in education. This will tie in nicely of the 19×5 times of the film, showing Marty Mcfly and Jennifer parker in the class of 1985, and if the website viewer looks hard enough, George Mcfly, Lorraine Baines and Biff Tanner as well as “Calvin Klein” who’s picture will be missing. When clicked, the bio of Calvin Klein will show very little information, but will give a link to a website where the user will be redirected to a website about Huey Lewis and the News and will also inform the user that Huey’s previous jobs included working in a Nuclear power station. Underneath this they will able to see Huey Lewis’s track listing for the soundtrack.

By using the track length on the password section of www.zemeckisnuclear.com the user will be rewarded with “Back in time” to download as well as the trailer for the film.

I really did love this film, and hope this “What If” did it justice. What do you think?

“What If” is a series in which Iain explains how a past film could have done a viral campaign with current technology.
Back to the futureWhat IF