Jennifer’s Body opened this weekend, and all 13 to well, let’s say 80 year olds have to be at least intrigued, thanks to the hot trailers, pictures, and posters that have come out to promote the Megan Fox film. Jennifer’s Body is written by Diablo Cody, and the Juno scribe’s imprint is all over this thing. The film is about high school popular girl Jennifer who turns into a boy-eating demon after a run-in with an occult-following indie band, headed by Adam Brody (of OC fame).

If that premise alone sounds far-fetched to you, than wait to you actually see the flick. There are so many unexplained moments, that it’s hard to really get into the world that the film presents. The believability factor is extremely low, and not just because of the supernatural stuff, which itself is only vaguely explained. The band in question sacrifices Jennifer (inaccurately believing her to be a virgin) so they can make it big. The problem is that the band doesn’t seem to fit the requirements for people that would turn to murder. They don’t look desperate or Osbourne dark enough to go out to a small town and pick a virgin to slaughter. The film has many more, “why is this happening?” moments, so be aware. 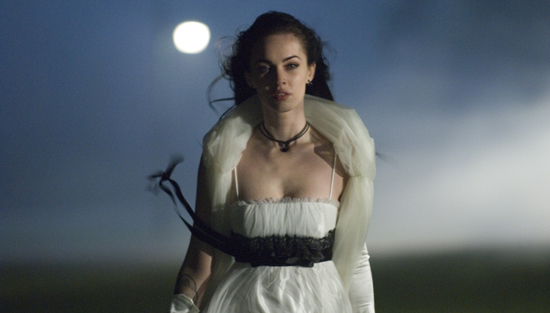 Is the film scary? Sure, at points there are some great tension-filled bread-and-butter scary scenes, but a lot of the demon-focused scenes were stifled by Cody’s unique dialogue. When your main character (Amanda Siegfried) is confronting a bloodied Jennifer ready to eat her, having Jennifer make a tampon joke just seems weird. Another awkward horror scene involves the Akon song “I Wanna Love You”, so I think you get the picture.

Speaking of Cody’s dialogue, it worked great in Juno, but it was hit and miss here. Like I said before, it sometimes takes you out of the film and any sense of realism, but at other times it’s pretty funny. The comedy in the film is decent but too scattered. I was hoping for a more tongue-and-cheek Drag Me to Hell experience, but Body doesn’t balance the humor and horror even remotely as well as Sam Raimi’s summer hit.

Last, let’s get to the important part; the sex factor. Megan Fox is sexy, but most of her hot scenes we see in the trailers, clips, etc. There is not enough new stuff, and it really disappoints. Seyfried has her hot moments, though the film successfully downplays her beauty pretty well.

In the end, there were definitely parts and elements of the film I enjoyed, but it just didn’t seem to work for me overall. It tries to be a comedy and horror film, but it only half-succeeds at both. Unless you have a Megan Fox fetish, just stick to Drag Me to Hell.