Avatar Review: Is It Revolutionary?

It’s here! The extremely long wait is finally over and it’s here, in your very own local cinema, awaiting you to take your seat. It seems like a long time since I first read about Avatar, and that’s because it is. About four years ago it was confirmed that James Cameron was working on his next project, and it was a Sci-Fi Film. From the word “Go” the rumour was that this film was going to be a game changer, a film that would revolutionize cinema. I wish I had put a bet on that, because they were right. They nailed it! This review really has two components to look at. There is the story to be considered on one hand, and the special effects on the other.

Special effects are big thing for me. For years, they were an addition to what was going on on the screen; something to help your imagination along. I find that the Star Trek franchise sums this point up for me. Watch any of the early original episodes and the special effects are laughable, but they helped to set the scene. This was fine for years but then along came Star Wars. It has to be recognised as a milestone in cinema history, because it changed what we saw on screen. The ripple effect this brought to film can be seen up to this day, and the pioneer, ILM, is still the biggest and best in the business.

The problem I now have with special effects is the part it plays in a films today. 2012 may be the perfect example of this. If you read Dan’s review, you will remember his issues with the effects, that there far too many things going on to take in. For films like this, the special effects are the story, with everything gearing up to that set piece, where the White house is destroyed, or a big explosion rips through the Manhattan skyline. It takes away from the imagination of the audience, and I fear, the writers as well. But people are starting to notice and perhaps the biggest rebellion centered around Transformers 2. The effects were big, but the story was terrible and the acting even worse. It seems we, the film-going audience, have started to see past the effects now.

Up until this week, my film of the year for special effects was Star Trek. The effects were beautiful, well-crafted, and subtle. They add to the film but don’t take over it. If you look at the shuttle hanger scene for instance, you’re watching the film, not the effects, because they are subtle, believable. I was worried that Avatar would err on the overpowering side, after all, at least 75% of the film is special effects, but wow, you’d better be ready.

My advice for your trip to the cinema? You’ll need to do some preparation work first. Buy some energy drink and some saline solution, mix them up and soak your eyes in it! You’ll need it. The effects are amazing. It’s as simple as that.

You might have cringed when you saw the first trailer. I know I did. These big blue creatures walking around just didn’t quite sit right with me, but when you see them on the big screen in all their 3D glory, you very quickly forget that these creatures are not real. The animation is flawless in their movement and their interaction with the scenery. It is like nothing you have seen before, and Cameron must be applauded for waiting all these years (upwards of 10 if you’re counting) until the technology could keep up with his imagination.  The marines’ weaponry and machinery is just as amazing to watch and looks so damn realistic and plausible that I expect to see them hit the battlefield sometime in the future. Cameron enjoys taking us to places that we have never been before. Just watch the doc “Return to Titanic” to see his perseverance, and in Pandora, he has once again showed us a place that is so wondrous and intriguing that you want to spend more time there.

My one admission I have to make is that I watched this in a normal cinema rather than on IMAX (we’ll update the review though when we do), and as such I don’t know if my criticism of the 3D will ring true with those that do get to see it as the director intended. In parts the 3D worked very well, but there are other moments that I would have been just as happy watching the 2D version. The scene at the start of the film which sees Jake Scully landing on Pandora is a good example of 3D that works, but at other points, particularly when the Navi are on screen, the 3D seemed to be lacking. There are some scenes where you are following Navi Scully through the trees at a great height, and this should have been the money shot, but it just didn’t materialize. As I said, this may not be the case in IMAX, so if you’re torn between your local Multiplex or IMAX, choose IMAX for sure.

So, in terms of the special effects thats a big A+. This is the Star Wars for our generation, and your kids will be watching this for several Christmases to come. It will change cinema.

The second part of this review must look at the story, the thing that holds all the special effects together. As plots go, it is good, but it’s not exactly original. Yes, everything you have read, everything that has been parodied is true. This is Cowboys and Indians in space. This is the undercover cop who gets in to far and loses his direction. This is  a “save the planet” film. It does however mix these elements together well and you will enjoy it. 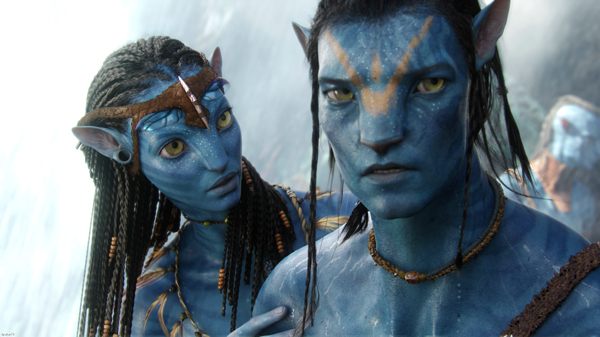 The plot of the film follows Jake Scully, a Marine who has lost the use of his legs and is offered the chance of life changing surgery in return for a tour of duty on the planet Pandora as a Navi, the native residents. The film follows his acceptance to a wary indigenousness colony and we watch as Scully learns the language, ways and beliefs of the Navi. Back in the human camp there is power struggle taking place between those that wish to mine the colony for a precious rock, and those that believe the Navi should be left alone. This proves to be a hard internal struggle for Jake himself and he has to ask himself whether he should side with the humans, find a suitable alternative or turn his back on mankind and live his live as a Navi.

Like I said, it’s not the most original of stories, but it is an enjoyable one, except for one uncomfortable scene that sees Scully taking the hand of friendship just a little too far. For those expecting a ground breaking story to match the visuals will however feel slightly let down. The acting is outstanding though for the little you see of real humans, and yes, Stephan Lang really has stolen the show.

So should you see it? Yes. Absolutely. This is really one of those films that HAS to be seen at the cinema. It will be very interesting to see how this transfer to your home when the Blu-ray comes out, but you will lose some of the experience without a doubt.

As this is a review I can’t really give it 2 different marks but I hope I have managed to get across how much I was impressed by the special effects. As it is, I’m going to give this film a solid B+. It’s not the greatest film of our time, but then, neither was Star Wars, and to compare the two is, I believe, an honour. This film will amaze you. Go see it.

Have you seen the film yet? Do you agree or disagree? Have you seen it on IMAX? Leave your thoughts about your experience below.