One of my favorite holiday movies of all time is Home Alone. Whenever I hear “Carol of the Bells”, I always think of that movie. Well, for all those other fans out there, now you can follow the plot of Home Alone on Twitter! Yes, that’s right. Thanks to Twitter’s new list feature, you can see tweets from all the main characters in order of how they would appear in the film. 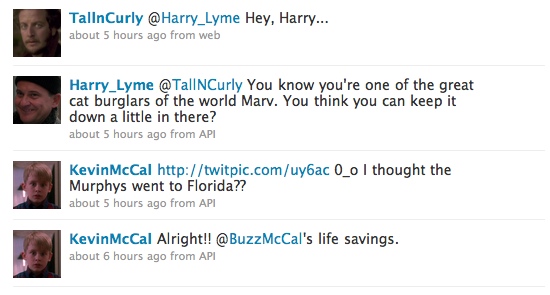 It’s called the Home Alone Twitter Project, and by following the list, you’ll see tweets from 23 characters in the film, including Kevin McCallister and most of the McCallister family, robbers Harry and Marv, and even Ben Marley, the scary old guy with a shovel. Each character has their own twitter account so they can interact, but reading them all under the list allows you to follow the events in the film from beginning to end in real time (it’s over now, so you can actually read the whole thing).

The narrative uses modern devices such as Twitpic and YouTube, and even uses Internet lingo such as Harry’s “o_O” tweet. It’s really quite brilliant, so check it out for yourself. I’m crossing my fingers in hopes they do Home Alone 2 next year. Thanks to Slashfilm for the heads up.

Viral Video Round Up: The Simpsons, Jingle All The Way, Home Alone, Critics Choice Awards, And More!

Viral Video Round Up: The Simpsons, Jingle All The Way, Home Alone, Critics Choice Awards, And More!