LOST 6×03 “What Kates Does” Recap and Review

To catch up on last week’s two-part season six premiere of ABC’s LOST, check out Corey’s recap and review. In this Kate/Claire centric episode, we see the ramifications of Sayid rising from the dead and (in the alternate universe) Kate escaping the airport in Claire’s cab. After Sayid’s resurrection, Dogen, the leader of this set of Others (how many are there?!?), tortures, i mean diagnoses Sayid, and realizes he’s “infected” with something. He tells Jack that he has to give Sayid a pill to make him better, but after Jack calls the bluff by trying to swallow the pill himself, Dogen reveals that it’s actually poison. Why poison Sayid? Didn’t you just try to save him?

Apparently, this “darkness” is engulfing Sayid and will turn him evil, just like it did to Claire (according to Dogen). The only way to stop it is to kill Sayid. What is Jack to do? In other Island news, Sawyer escapes, so Kate, Jin, and two Others go out to find him and bring him back. Kate dispatches of the chaperones and plans to find Sawyer to find Claire, not to go back to the temple where the Others claim it is safe from Smokey. However, when she finds Sawyer, she finds out he was going to propose to the now deceased Juliet, and he’s not looking to do anything. Jin, on the other hand, goes in search of his wife, but instead finds Claire, who we can assume (thanks in part to Dogen’s revelation) is the one who sent the Danielle Rousseau-like traps that originally dispatched the Others goons. What is Jin to do?

Speaking of Claire, in the alternate universe, Kate, Claire and the taxi driver leave the airport, but when the driver bails at a red light, Kate takes Claire’s bag and leaves her. After getting her handcuffs off and realizing she just stole a pregnant woman’s baby bag, she finds Claire and gives her a ride to the couple’s house who is supposed to adopt the baby. Unfortunately, the husband left the wife days earlier, and the news that the woman can’t take the baby causes Claire to go into labor. Kate takes her to the hospital, where her doctor, suspiciously, is Ethan (William Mapother), the Other who in the other universe tried to steal Aaron. Could this just be an easter egg, or will it lead somewhere? Either way, the police later come looking for Kate, but Claire covers for her. 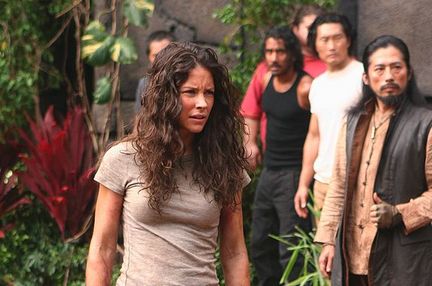 So, what have we learned? This “infection” Sayid has is apparently the same sickness that got to Rousseau’s original group 19 years ago. It makes you go a bit crazy in the head and start killing people. Why? Who knows…yet. I’m using quotation marks a lot because this episode was the epitome of vague talk and non-answers. The writers have found a new way to avoid answering questions we all have while watching the show. Instead of the characters just not asking them (how could you not be curious about Dharma?), now when they DO ask, the one with the knowledge just doesn’t say anything. Smart.

A trend I’m seeing with the alternate universe is that there seems to be a connection to the original universe. The looks the characters give, especially to each other, and Claire calling out Aaron’s name before she had even decided it, all seem to indicate that down the line, they may remember their time on the Island. Why is this happening, and why is it important? I don’t know, but I’m thinking the point is to show that the characters are better off for being on the Island than if they hadn’t crashed. It this what the season is leading up to? Of course, we’ll have to wait and see.

Be sure to check out next week’s episode, “The Substitute”, at 9/8c on ABC.
ABCLOST