Things are really moving now on the final season of ABC’s LOST. In the eighth episode of season, we get a Sawyer-centric episode that has him doing recon (hence the title) for Fake Locke on the Island, while the alternate timeline Sawyer has led quite a different life. Find out all the details after the jump.

Let’s start off with the surprising alternate timeline. We start off with Sawyer just finishing up in bed with a woman, of course. It looks like he’s still a con man, but thanks to the password “Le Fleur” (great callback), we find out that he’s in fact an undercover cop and Miles is his partner. Next, we see Sawyer with a list of people named “Anthony Cooper” and calling them to see if they were in Alabama in 1976, which is obviously when Cooper, Locke’s father, conned Sawyer’s parents, leading to their deaths. In either timeline, Sawyer is obsessed with finding this guy, although here he keeps it secret from Miles and everyone else.

Miles then sets Sawyer up on a blind date, which happens to be with Charlotte (who in original timeline came to Island with Miles and Daniel Farraday before dying). They hit it off, but after getting it on, Charlotte finds his file on Cooper, and Sawyer kicks her out. Miles, miffed about Charlotte, finds out that Sawyer’s vacation to Palm Springs was actually a trip to Australia (flight 815), but when Sawyer won’t talk, Miles quits as his partner. Finally, Sawyer watches an episode of Little House on the Prairie (no joke), and realizes you have to live life one moment at a time. He tries to get Charlotte back, but it’s too late. He does open up to Miles about how he’s hunting down Cooper, but then their car is slammed by another car. He chases down the perp, who just happens to be Kate. 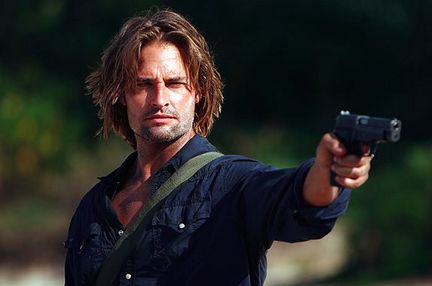 On the Island, Sawyer is at Claire’s camp and wakes Jin up. The rest of the Locke clan get back to the camp, where he tells everyone that the smoke monster killed everyone who stayed behind at the temple, but he’ll protect them now. They all move towards wherever their final destination is, but when they eventually have to camp for a few days, Sawyer wants some answers. Locke privately tells Sawyer that he himself is the smoke monster, but it was all for a reason. Now he wants Sawyer to go to the Hydra Island (with the cages and such) to do some recon. They are going to leave on the plane the Oceanic 6 came in on recently (2007).

While Sawyer is away, Claire tries to kill Kate, but Locke saves her. He later explains that Claire needed something to live for once her baby was gone, so he told her the Others took Aaron to give her a purpose. Now all the hatred has to go somewhere else. Then things get interesting. Fake Locke tells Kate about his own mother, who was apparently crazy. He experienced things that he infers to be pretty bad, and he’s still dealing with it. He’s worried that Claire is crazy too.

On Hydra, Sawyer gets duped into being captured by Charles Widmore’s gang, and he cuts Widmore a deal. He’ll lure Locke over to the Island by saying the coast is clear, and all of Sawyer’s friends get to the leave the Island safely. They agree, but when Sawyer comes back, he tells Locke about his plan, eventually revealing to Kate that he’s setting it up for the two to fight it out while he books it out of there with her in Widmore’s submarine.

There are a lot of things to take away from this episode. First of all, we really see how Sawyer’s life choice of con over cop was a flip of a coin. In one reality it flipped one way, in this one it flipped another. No matter what, he still has that drive to get back at Cooper. There are a lot of great connections in this episode too, from “Le Fleur” to Charlotte to Kate. The insight we get into Fake Locke is interesting, as the real Locke has daddy issues, and Fake Locke has mommy issues. I almost feel like it’s a lie, or that he’s trying to convince Kate not to let Claire off the Island for some dubious reason. Finally, I think we’re seeing a real shift in Sawyer. At the end of the episode he calls Kate “Freckles” for the first time since she left the Island, he goes from wanting to get everyone off the Island to just him and Kate. Either way, Sawyer is playing with fire.

What did you think of the episode? Next week’s episode “Ab Aeterno” is Richard-centric and should be a doozy!