Almost exactly one month ago, we brought you the news that Comic-Con International might have to look for a new place to hold its annual convention after its current contract with San Diego expires in 2012. A few options have been tossed around, but Anaheim seemed to be a good option. After the jump, find out how Disneyland’s city is now throwing its hat into the ring.

The Anaheim/Orange County Visitor and Convention Bureau has issued an open letter of its intention to woo CCI to host its comic/sci-fi/fantasy/everything else convention at the Anaheim Convention Center, along with a top 8 list of reasons why Comic-Con is a perfect fit for the city. The list expands upon some of the things I mentioned our first report, mainly the larger size of Anaheim’s convention center and the abundance of hotels. Check out the full countdown below.

2. Proximity of Reasonably Priced Hotel Rooms:
Orange County has 55,000 guest rooms total. 20,000 of these guest rooms are located in Anaheim. There are 12,000 hotel rooms within one mile of the Anaheim Convention Center and 7,000 within walking distance, all within a variety of competitive price points.

7. Things To Do:
Contrary to the perception of some, there is lots to do in the Anaheim Resort Area. Both Downtown Disney District (which has venues like House of Blues Anaheim, Ralph Brennan’s Jazz Kitchen, ESPN Zone and AMC Theatres) and The Shops at Anaheim GardenWalk (CinemaFusion, 300 Anaheim, Bar Louie, and FiRE + iCE, Heat Ultra Lounge) offer visitors plenty of after-hours entertainment. The Honda Center, Grove of Anaheim, Downtown Anaheim, The Block at Orange and Stadium Promenade are also nearby and can be accessed via the Anaheim Resort Transit Shuttle or Taxi.

8. Safety & Security:
Anaheim is the safest city to visit of 35 U.S. cities with a population of 250,000 – 500,000 according to U. S. Justice Department statistics. Anaheim is a safe and secure destination with a Tourist Oriented Policing (TOP) team dedicated to keeping attendees protected. 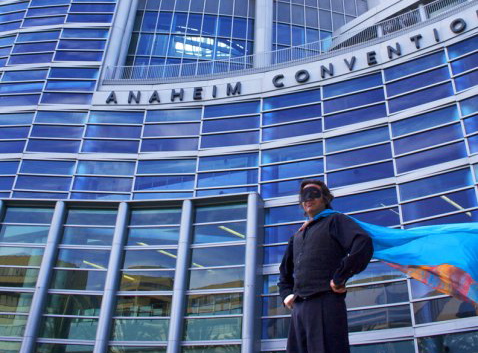 If that wasn’t enough, the Anaheim/OC VCB has started a Facebook Fan Page called “Bring Comic-Con International to Anaheim, CA” to try to drum up support. There, you can do all the regular Facebook Fan things like wall writing, as well as read the top 8 list and the open letter. If you want to follow the efforts, it’s a good idea to become a fan. Here’s an excerpt of the letter.

We’ve set up a Facebook Fan Page to gauge the fervor of the Southern California crowd; a page to show you just how excited people would get at the mere consideration of Comic-Con International moving to Anaheim.

Of course, there will be those who differ in sentiment, and those opposing viewpoints will be welcomed. Dissent will be handled with respect to the commenter, San Diego, and Comic-Con International.

Trolls, on the other hand, will be fed to the pit monster.

The outcome of this endeavor is unknown, but the effort will benefit us all by helping you decide the best possible location for Comic-Con International 2013 and beyond.

Obviously the goal is to prove to CCI that people would really love the change of venue, and that the Bureau is game for whatever it takes to make it happen. The reason for the push is obvious: Money. There’s lots of money to be made when you have thousands of people flooding a city. They might even move the convention to the Fall or Winter, as keeping it in the summer might cause too much congestion with the Disneyland vacationers.

As I’ve said before, I would love the change, as it seems like a perfect fit (disclaimer: I live less than 12 miles away from the Anaheim Convention Center). What do you think? Would changing the city ruin Comic-Con? Or has the event lost so much of its original essence that it doesn’t matter anymore?