As we reported on Tuesday, the Flynn Lives group is planning to protest the Encom Press Conference tomorrow night, and they are getting together beforehand to plan it out. Now the group has launched a new website to help organize their meeting. Check out the details after the jump.

The new site gives the protest a name, Operation Tron. The pre-protest meeting will be from 6:30 to 7:45pm in advance of the 8pm press conference. Technically, the meeting starts at 7:10, but if you are going, I recommend being there when the doors open at 6:30, as it may be crowded. The Encom press conference, where consultant (and Flynn friend) Alan Bradley is set to announce something new from the company, will be held at Justin Herman Plaza, and the protest meeting is next door at the Hyatt Regency hotel grand ballroom.

As for what to expect from the meeting, press conference, or protest, we are still in the dark. According to the flyer (seen below), they will be giving out t-shirts and posters, which I assume are intended to be used during the protest. The Flynn Lives group is protesting Encom International for abandoning hope and efforts in the Kevin Flynn search. The group believes he’s still alive, but the company has moved forward without him. FirstShowing will have video and a recap of the events, and we’ll compile all the news we get from the night to give you a good picture as to what happened, what we learned, and where we go from here. If you attend the protest and meeting, let us know how it was! 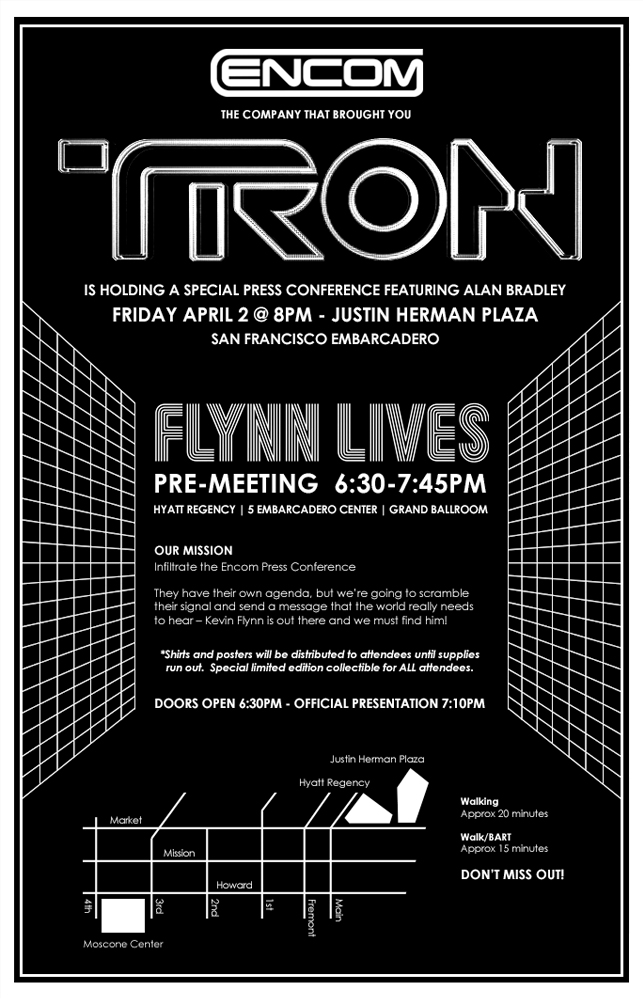