LOST 6×11 “Happily Ever After” Recap and Review

The 11th episode of ABC’s final season of LOST aired tonight, titled “Happily Ever After”, leaving only five episodes until the finale. This episode is the follow up of last weeks episode The Package, which ended with Desmond being drug off of the submarine. In this episode, we get a few good hints at to what the flash-sideways are, and what their overall meaning is (I know, I’m shocked that they’re not meaningless too). We also get quite a few on and off-screen cameos.

“Happily Ever After” starts on the Island with Desmond waking up to Zoe at his bedside, later followed by Charles Widmore telling that he brought him back to the island, away from Penny and Charlie (Desmond and Penny’s son). Desmond attacks Widmore before being restrained by a few of Widmore’s men. Widmore tells them to prepare a machine. Next thing we see is Jin walking by a big box-like room. Eventually we enter the mysterious box-like room, there is a single chair in the middle of two gigantic circles on each side of the room. We find out that they’re electromagnetic and that Desmond’s “unique” abilities allowed him to survive a blast from a force like the one that comes from the room (back in the hatch). After fighting for a bit, Whidmore tells Desmond that the Island isn’t done with him yet, and that he’s needed for one last sacrifice, or everything he misses will cease to be (as we’ve heard before). They leave Desmond in the room and turn on the machine, before it cuts to…the alternate reality.

In the alternate timeline (flash sideways), Desmond is a bachelor and a successful business man, working for his original timeline nemesis, Charles Widmore, who he also became a good friend with. Widmore tells him that he needs to pick up someone from jail, that this person is going to play along side his son and the band Drive Shaft. Yeah, you know exactly who it is from that second on. Desmond goes to pick up Charlie from jail and is immediately thrown into something he doesn’t want to deal with. Charlie wonders across the street, almost being hit by multiple cars and goes into a bar, Desmond joins him and  Charlie tells him that none of what’s happened matters and that he saw his life, how it was meant to be (seeing who we can presume to be Claire). After the bar, while driving to the event for Widmore’s son, Charlie goes crazy, fighting Desmond for the wheel and eventually crashing both of them off of a dock and into water. Desmond escapes, and goes back down for Charlie and suddenly there’s flashes where Desmond sees Charlie’s hand with “Not Penny’s Boat” written on it. He pulls him to safety and are rushed to the hospital. Desmond is given a cat-scan, where he sees more flashes of his other life. He sees the birth of Charlie (his son he names after Charlie from the crash), and more visions of Penny. He panics and runs into Jack Shepard, before finding Charlie, who tells him to find this Penny. 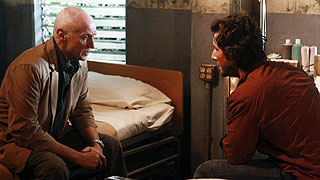 As Desmond begins to question these events he is witnessing, he tells Widmore that he lost Charlie. Widmore tells Desmond to tell Widmore’s wife himself, as she will be very upset. At the event, Mrs. Widmore is yelling at some ushers for not setting up the tables correctly, and we see that it’s original timeline Eloise Hawking, Daniel Faraday’s mother and the woman that got the Oceanic 6 back onto the Island. Desmond tells her how Drive Shaft won’t be able to play with her son. She seems nice and understanding and forgives him. Desmond heads to leave, but overhears an attendance counter read “Penny”. He asks to see the list but is stopped by Mrs. Widmore, who tells him that he’s not ready, that it’s not his time, and she knows about the visions. As he leaves he meets with their son, it’s Daniel Faraday as expected. He’s a musician, but had visions (of Charlotte it sounds like) and wrote something only a quantum-physicist would know, which original timeline Daniel was. It’s a nuclear bomb of some sort that he thinks he set off in another reality. He goes on to tell Desmond that these visions were the life they were supposed to live, not this one, and that he can tell him to where to find Penny, who is his half-sister. Desmond meets Penny, and it’s at the same place where he met Jack Shepard in the other reality. They go to shake hands and the next thing we see is Desmond on the floor of the room on the Island. He flashes back to this other reality and offers Penny to take her to lunch. As he leaves the stadium, Desmond tells his limo driver to get the manifest of the Oceanic 815, so he can “show them something”.

Back on the Island, Desmond is woken up and seems happy and willing to help out Widmore at any cost, a completely new side of Desmond. As Whidmore tells a few of his men to take Desmond back to the sub. They’re cut off by Sayid as he kills them all except Zoe, telling her to run away if she wants to live. Sayid tells Desmond to come with him, and he does so, just as willingly.

Overall: “Happily Ever After” was a great episode, as all Desmond-centric episodes are. The thing I enjoyed the most about this episode, other than the cameos, was them starting to explain the importance of the flash-sideways. I was actually beginning to wonder if they were all meaningless and just filler side-stories and I’m glad there is a meaning to them now. You’ll notice that Love is playing a big part of the final story lines, and it’ll be interesting to see how the two realities collide. This was a pretty good episode and the cameos seemed just right for the story of Desmond. Each episode of this final season just gets better and better, I will be sad to see it gone. 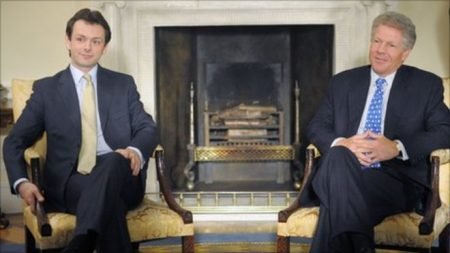