With Iron Man 2 less than a month away, the viral updates are coming thick and fast as Paramount and Marvel ramp up the campaign before the release. Today our friends at the UK site HeyUGuys received a package from Accutech, the company set up by Tony Stark to bring his technology to those who need it, in this case a Haztech Exoskeleton.

The package, seen below in the picture, includes a data disk showing the infomercial on the company and the Exoskeleton video, which you can see here. Also included is a coversheet with Accutech header, as well as a glossy brochure and a Accutech branded mug. 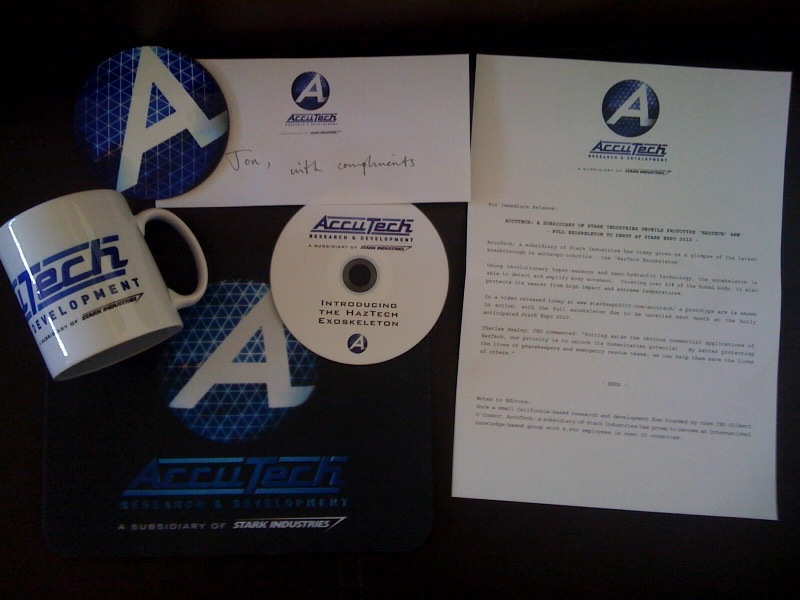 A press release is also included which can be read here in full:

ACCUTECH: A SUBSIDIARY OF STARK INDUSTRIES UNVEILS PROTOTYPE ‘HAZTECH’ ARM – FULL EXOSKELETON TO DEBUT AT STARK EXPO 2010 –
AccuTech: a subsidiary of Stark Industries has today given us a glimpse of the latest breakthrough in anthropo-robotics – the ‘HazTech Exoskeleton’.
Using revolutionary hyper-sensors and nano-hydraulic technology, the exoskeleton is able to detect and amplify body movement. Covering over 80% of the human body, it also protects its wearer from high impact and extreme temperatures.
In a video released today at www.starkexpo2010.com/accutech/ a prototype arm is shown in action, with the full exoskeleton due to be unveiled next month at the hotly anticipated Stark Expo 2010.
Charles Healey, CEO commented: “Putting aside the obvious commercial applications of HazTech, our priority is to unlock its humanitarian potential. By better protecting the lives of peacekeepers and emergency rescue teams, we can help them save the lives of others.”
– ENDS –
Notes to Editors: Once a small California-based research and development firm founded by then CEO Gilbert O’Connor, AccuTech: a subsidiary of Stark Industries has grown to become an international knowledge-based group with 4,800 employees in over 30 countries.

In other news, Robert Downey Jr. has been interviewed by Virgin Media about the film and believes that the film will surprise you. I think this statement will ring true judging by the unexpected reaction the original got from fans of the comic book and non-fans alike.

So what do you think? Has Paramount missed out by heating this up with only a month to go, or do you think they have nailed it? I for one think the timing is perfect as the director, Jon Favreau, has made it pretty clear he wants to keep his cards close to his chest in terms of plot details.

Leave your comments below.