Although estimates of weekend box office figures are usually pretty accurate, sometimes we get a bit of a surprise. This weekend was a great example, as new release Kick-Ass barely beat out three week old How to Train Your Dragon, which was expected to win out. However, everything isn’t coming up roses for the superhero flick. See the results of the weekend after the break.

Kick-Ass nudged out Dragon by less than $200,000, taking in $19.8 million. However, some anaylsts expected it to make closer to $35 million, especially given all the buzz it got in the weeks leading up to its release. The critics generally liked it, it did well at film festivals, and the trailers were pretty solid. So, why couldn’t it even pull in $20 million its opening weekend? Some point to its dyslexic concept that appeals to kids but is intended for adults. The R rating may have made the film better, but it definitely doesn’t help rake in the big bucks. 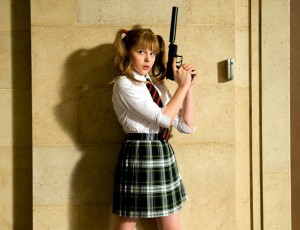 I think the lack of large fan base is what really doomed Kick-Ass. Not a lot of people have read the comic, and without a big name (outside of Nick Cage’s supporting role) to sell the film with, it’s hard to expect The Dark Knight type numbers. The Fantasic Four had a similar problem with stars, but it’s built-in fanbase was enough to make it good money. Top 10 results for the weekend below.