NBC’s Saturday Night Live has had trouble converting their popular recurring skits into quality (and profitable) films. You could even argue that Wayne’s World was their only true success story, and may be the only reason they kept trying. This summer, the producers of the show are trying to break that trend with MacGruber, an action comedy starring Will Forte. To help promote the movie, NBC Universal has created an iPhone app and a MacGruber Training Academy website. Details after the jump.

The free iPhone/iPod Touch/iPad app (they really need a cohesive name for those) has more features than some other movie-promoting apps. This app features a game (Bomb Defuser Challenge), a mullet-making photo tool, a soundboard with lines from the film, some ringtones, all the regular stuff you’d expect like a trailer and photos. You can download the app here. 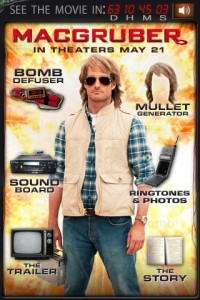 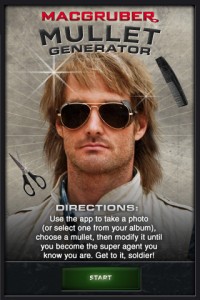 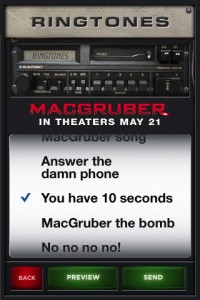 The MacGruber Training Academy is a pretty cool viral site. While the style and funny lines from Forte are cool, it’s the games that make it worth the trip. They are actually rather fun and definitely give you a good sense of the film. There’s a shooting game, another bomb defusing game, and even one where you can hit Val Kilmer over the head with celery!

All in all, while the mobile and viral marketing don’t get us deeper into the story of MacGruber, it’s not really necessary, and we definitely get a feel for the film’s setting and tone. Plus, they are actually fun, which isn’t always the case.