Drones is not your typical office comedy. Sure, it has that quirkiness made mainstream by the likes of The Office, along with witty banter and jokes involving office supplies and politics that can sometimes be the funniest. What makes it different is one little twist. Some of the employees are aliens. Check out my review of Drones, as well as the Q&A with cast member Samm Levine, after the break.

Jonathan M. Woodward plays Brian, an contently unambitious employee of the generic company OmniLink (aka a “drone”). He spends his workdays bantering with best friend Clark (Levine) and innocuously flirting with co-worker Amy (Angela Bettis) until his routine is upset by finding out Clark is an alien. The next few days are a downward spiral as he finally asks Amy out, but finds out she’s also alien, set to destroy the Earth at some point. 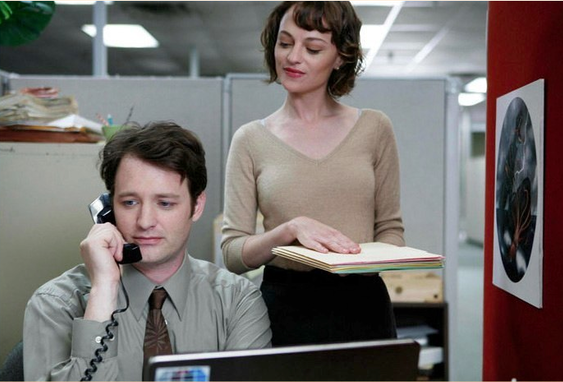 The film clearly takes a page from the current quirky comedy trend, but manages to stay away from the awkward (read: hard to watch) moments that the genre can let seep it. Some of the comedy felt a bit forced, but there were a lot of genuine moments that were so mundane yet hilarious. Woodward has a strong resemblance to Bill Murray, both in his look and his delivery. If someone ever does a biopic on Murray, you’ve got your leading man. This familiarity helped me side with the character even when he was being a bit dumb or overreacting. The other characters were likable enough, but Marc Evan Jackson definitely stole some seasons as Ian.

Drones never goes too high tech, with only three scenes that I remember using any kind of special effects, and all were minimal. Despite this, you really did believe in the premise, though the ending seemed a bit forced to me. There were too many coincidences and unbelievable behavior, though they found an intriguing way to raise the stakes for the climax without going outside the bounds of the regular office setting. Overall, I enjoyed the film and its unique mix of genres on a low budget.

Drones is directed by Amber Benson and Adam Busch and written by Ben Acker and Ben Blacker. For more information on the film, upcoming screenings, and distribution news, go to DronesMovie.com. Below is the quick Q&A we had with Levine, along with a trailer for the film.