The countdown to Space Paranoids Online is still going, and while you watch the time tick away, you may have shot down a few Recognizers in the process. As we reported, shooting down 99 of the tank-like vehicles gives you an achievement on Flynn Lives, if you are a member. Well, if you get 999 kills, you get something even better.

Thanks to the Unfiction forums , we know several members of Flynn Lives (you can sign up to become one at FlynnLives.com) received packages in the mail today from Flynn Lives. The box of goodies looks to be a reward for finding Sam and shooting down 999 Recognizers on the the Space Paranoids Online countdown page. Here’s what MovieViral reader VanGoghX, who got a package, wrote in a comment:

42E [the company behind the Tron Legacy Viral] has sent out more freebies tied to the new badges awarded for the “Find Sam” and “Shoot 999 Recognizers” games listed above.

Flynn Lives members who completed the games get a package with the following inside:
-piece of paper that reads “Thanks for helping us track down Sam in Rio Fiamente. Show your support.”
-piece of paper that reads “999 You are a Recognizer killing machine!”
-two stickers with Sam Flynn’s 89 logo (‘89 is the year his dad disappeared)
-metal pin with Sam’s 89 logo
-metal pin with “Space Paranoids” and a Recognizer on it

Very cool indeed. Here’s a photo from an Unfiction forum member who also got one of the packages in the mail. Click on the image to see it in full size. 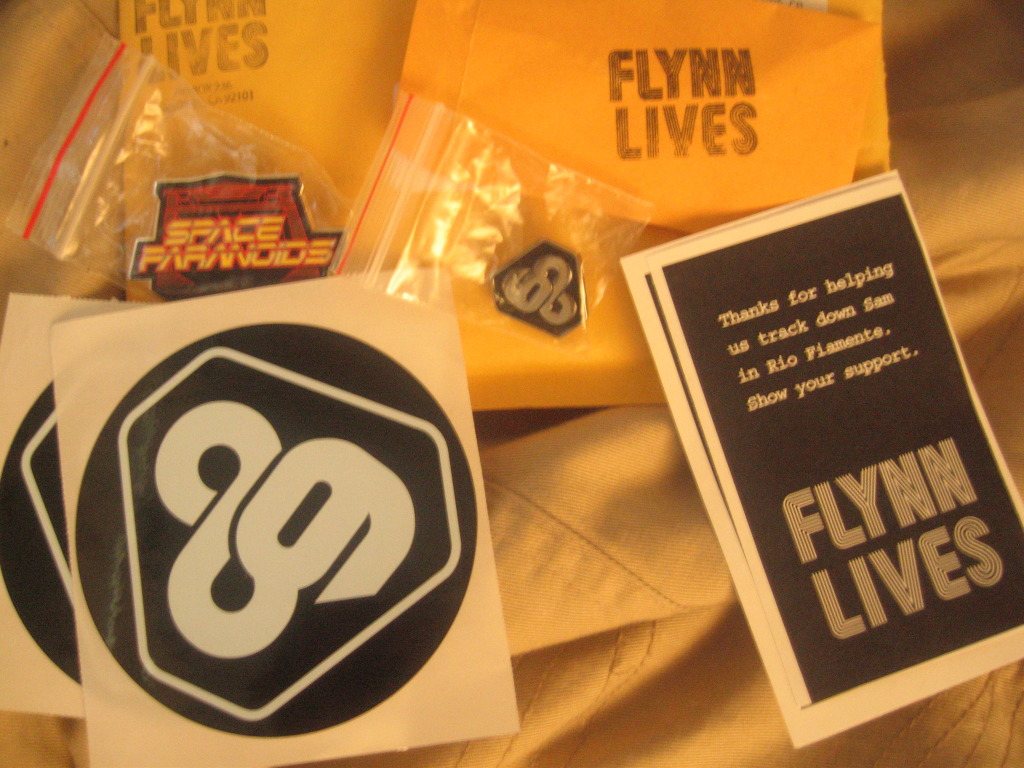 This is really a win-win for 42 Entertainment and fans of the film/ARG. We get free stuff, and they get free advertising (try telling me you aren’t going to put the sticker on your car or the metal pin on your backpack/suitcase). In case that isn’t enough Tron Legacy news for you, we also got a fourth banner that shows a four-wheeled vehicle not seen in the original Tron.

If you find anything else out, let us know! You can join the game by checking out Unfiction and our Tron Legacy Viral Page. Tron Legacy opens in December.