A few days ago, we reported that a few bloggers, including ComicBookMovie.com, had received a Stark Industries safe as part of the Reeses viral campaign for Iron Man 2. However, the safe was locked and the combination unknown the receivers. Thanks to Twitter, CBM got the code and revealed the contents. Find out what treasures were inside after the break.

Twitter user MITIronMan, part of the team of MIT students working for Reeses and IM2, gave out eight clues to the combination, and yesterday the safe was finally opened. Inside, there was a glow-in-the-dark “ARC” t-shirt (pretty cool), two Stark Expo VIP Exhibitor badges (very cool if they actually gain you access to something), three King-Size Reese’s Peanut Butter Cups candies (never can go wrong with candy), a 1GB memory stick with exclusive images (check out Comic Book Movie for those), and finally a letter from Tony Stark himself (which just tells you to go to the Reese’s Iron Man 2 website). 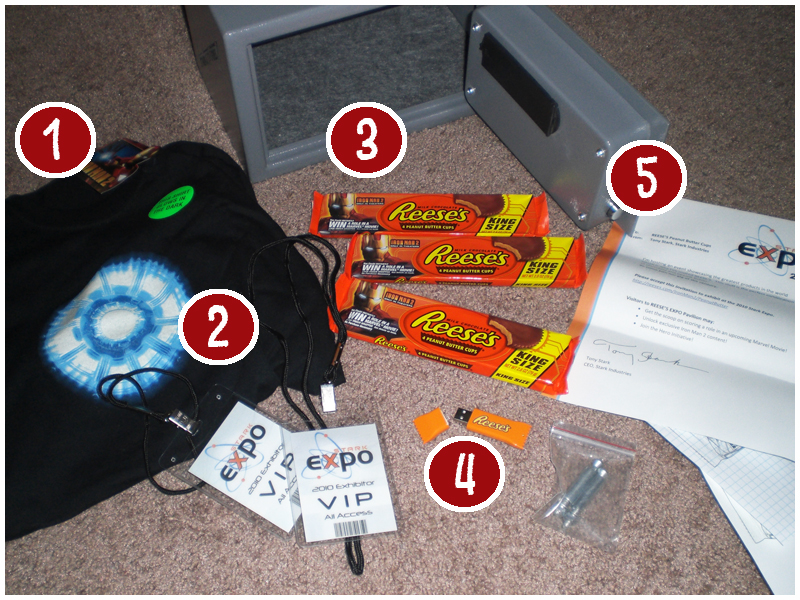 All in all, nothing that amazing, especially considering I can’t think of what the Expo badges could be used for, since there’s no actual Expo or event that would require them. You can actually check out one of the images on the flash drive (which are actually computer drawings by artist Nico Di Mattia) being created, with the addition of a background, in the video below.