LOST 6×14 “The Candidate” Recap and Review

This is the last month ABC’s LOST will ever be on the air, and things are really ramping up for the survivors of Oceanic 815. Tonight’s episode, titled “The Candidate” is a Locke-centric episode that focuses on why Locke doesn’t want to try to fix his disability in the alternate universe, while on the Island, Fake Locke and the gang get closer to leaving the Island.

In the alternate universe, we pick up where we left off in “The Last Recruit“. Jack tells Locke about an experimental procedure (using the term “candidate” in a not-so-subtle reference) in which he might be able to get Locke to walk again. However, Locke refuses. Jack needs to know why, so he sees Locke’s dentist to try to get some answers, and it just so happens to be Bernard Nadler from the Oceanic flight (same profession in both timelines!). Bernard gives Jack the name “Anthony Cooper”, who is of course Locke’s father. Jack finds Cooper in a nursing home of sorts, and realizes that he’s catatonic. Back at the hospital, Locke talks about the button and faith in his sleep, then Jack meets with Claire, who has a music box their father left her. Unfortunately, he doesn’t know why he gave it to her either, but he suggests she stay with him while in town, since they are family. When Locke is leaving the hospital, Jack finally gets Locke to explain how he got hurt. Right after getting his pilot license, he took his dad on a flight, but as soon as they took off, they crashed, causing Cooper’s current state as well. Locke is punishing himself for it, and won’t let Jack perform the surgery.

In the original timeline, Jack wakes up on the Hydra Island with Sayid, as Locke apparently brought them over. Sawyer and the gang get put back in the cages, until Locke comes as smokey to kill the guards. Sayid had turned the power off to the protecting towers, and Jack sets everyone free, and they set off to the plane. Locke gets to the plane first and finds the bomb Widmore had rigged. He tells the gang when they get there that they’ll have to take the submarine instead, since there may be more explosives. Sawyer pretends to trust Locke (he does keep saving everyone), but he tells Jack to make sure Locke doesn’t get on the sub. They raid the sub, but when a firefight starts, Kate gets hit, and Claire and Locke get left on the dock, while Jack is forced to stay on the sub to tend to Kate. 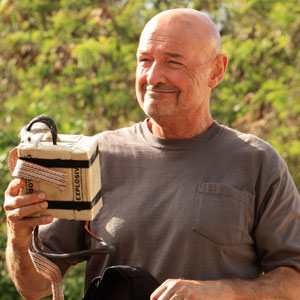 Jack finds the bomb Locke found in his backpack and realized Locke had made a switch earlier. There is a timer that this set for less than 4 minutes, but Jack wants them to do nothing, explaining that this was Locke’s plan all along. Locke can’t kill the candidates (despite the fact he said he could), so he had to make them get together and do it themselves. By trying to defuse the bomb, the group would be killing themselves, thus giving him a loophole. The only way for Locke to leave the island is for all the candidates to be dead. Sawyer doesn’t believe him and pulls the wires, which makes the timer go faster. Sayid instinctively takes the bomb to another room to sacrifice himself and protect the others. The explosion causes the submarine to sink, and while Jack, Kate, Sawyer, and Hugo get out, Sun is stuck, so Jin stays with her as the sub sinks. Back on the dock, Locke senses that the sub sank but not everyone died, so he’s off to finish what he started.

Wow, what an episode. Fake Locke was trying to gain everyone’s trust just so he could get them all together and kill them. The deaths in this episode were well done. Despite Sayid turning bad for most of the season, when given a chance to prove himself, he showed he was really a good person. The Sun/Jin scene was touching and arguably better than the Jack/Rose scene in Titanic. The question I have is whether Cooper is good or bad in the alternate universe. It looks like he had a good relationship with Locke, but earlier in the season, we know Sawyer is still looking for him.

Will Fake Locke find a way to kill the rest of the candidates (Jack, Sawyer, Hugo)? We probably won’t find out in next week’s episode “Across the Sea”, since it focuses on MiB and Jacob’s origins and past together. That will be a fun one to review.