Let’s see a show of hands. Who knew that Iron Man would turn into the hit that it was? Truth is, not many. Iron Man turned out to be a hugely unexpected success and was the 2nd highest grossing film of 2008 in the US. Everyone from the fans to the critics were taken by surprise, not least the studio, Paramount, who were quick to realise the success of the film and bankroll the sequel. So does Iron Man 2 have the metal to be as good as the highest grossing film of 2008, The Dark Knight?

Perhaps Iron Man’s success is the sequel’s downfall. The first film pleased almost everyone and the real Iron Man comic book fans warmed to director Jon Favreau in a big way. He took a gamble making the film the way he did. Casting Robert Downey Jr., an older actor with a torrid past, as the Billionaire playboy Tony Stark was viewed as a risky move. The Iron Man suit, unlike the caped crusader’s costume, was largely CGI based, which certainly worried people at the time (similar to the controversy surrounding Green Lantern’s rumored suit in the upcoming DC film). The biggest problem, though, was the pre-production hell that caused the film to be bandied about from studio to studio since 1990. Iron Man’s story could be a film in itself with the odds stacked against it, but it turned out the goods. This is why the sequel had a lot to live up-to, and in places it certainly achieved it.

Overall, and I’m not going to lie, the film a good popcorn movie, but it will disappoint fans of the original. This is not to say it is a bad movie, but it is definitely suffering from the sequel curse. In retrospect, maybe what made the first film good was following Tony Stark on the journey to becoming Iron Man. After all, it can’t be nice to suffer at the hands of your own weapons. I think that Favreau realised as well the emotional attachment you feel towards Stark whilst he is changing from war-monger to peace-keeper, and has decided to shoehorn in a subplot that tries to gain that attachment again, but ultimately fails. 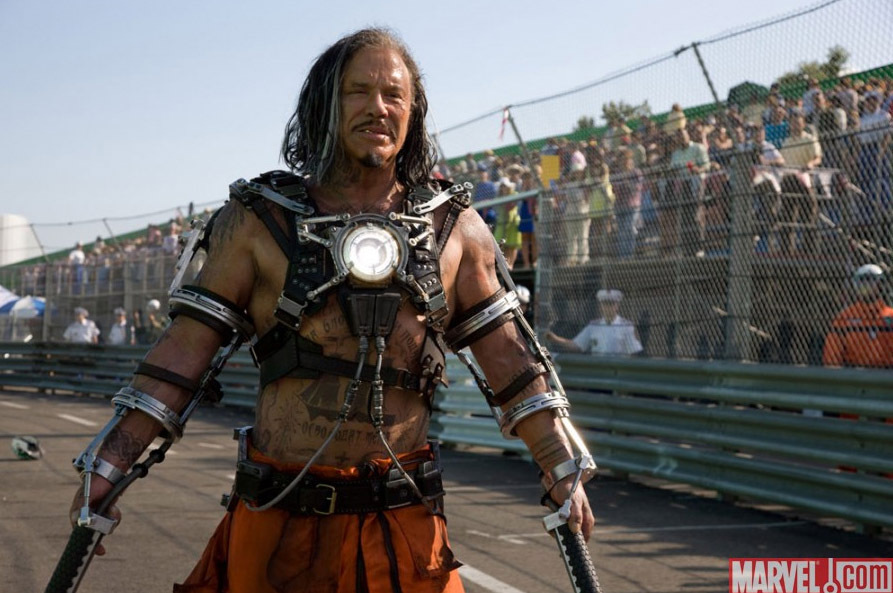 When we are first reintroduced to Tony, he is that charismatic showman that we remember from the first film. Robert Downey Jr’s performance is pitch perfect as always, but secretly he is hiding issues that could spell the end for him and Iron Man. Throughout the first half of the film, we see him battling these problems, culminating in a stand-off that is one of the better scenes in the movie. However, this mid-point battle is also a turning point for the movie as it starts to lose its way slightly.

For the first hour I was glued to my seat. The action was there, the witty dialogue that Favreau is famous for was there, and it set the film up nicely. From the first high-octane over-the-top scene that marks the opening of Stark Expo, to the court room battle with Justin Hammer (played by staff favourite Sam Rockwell), everything is perfect. The constant back and forth that take place between Stark, Hammer, and Senator Stern (Gary Shandling) in the Supreme court hearing are excellent, and it sets up the film nicely for the first villain showdown with Mickey Rourke’s Whiplash in Monaco. Honestly, I defy anyone to sit in the cinema and feel bored, because it’s not going to happen. So how does it all go so wrong?

Well, there are many unnecessary things present in the movie, and this starts to weigh it down. As well as the character sub-plot I’ve mentioned, there is also a lot of lead up to the upcoming Avengers movie, so much so that every time you see it, your eyes will roll. There are also unnecessary characters in the film that are taking valuable screen time away from the real stars of this show, Downey, Rockwell, and Rourke. 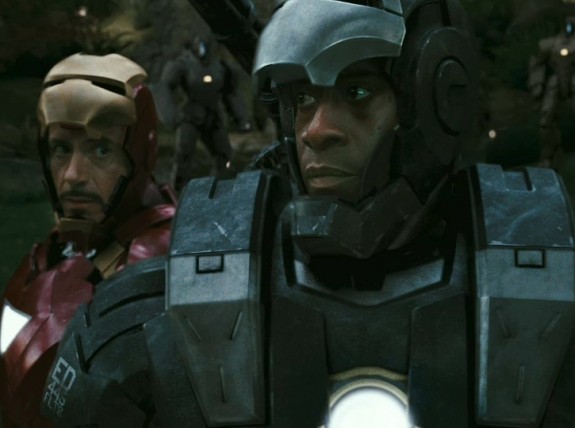 As much as Scarlett Johansson brightens up the screen when she is on it, and has one of the better fights scenes in the film, her character, Black Widow, is criminally under-used. It’s frustrating because she is largely in the background of most scenes, making the whole introduction seem pointless. Faverou’s own character, Happy Hogan is also given more on screen-time as “comedy relief”, but he would have been better served behind the camera than in front of it. I have to state now that I am huge fan of Jon, counting Swingers as one of my favourite films, but his character adds nothing to the film. Paltrows character, Pepper Potts, was great in the first film: a strong female character who had a kind of Jackie Kennedy aura about her, but again her character just doesn’t seem to sit right this time around. This is not to say that Paltrow has done herself a disservice, because she puts in a strong performance, all the talent do, but the character itself is the issue.

The film sort of meanders along until the final action piece, which itself is pretty good, but there are certainly issues with it. The action before the final battle is good, and brings the film back to life, yet the final battle itself is lacking. The best way to describe this is to refer you to the robot fight scenes in Transformers. There’s a lot of action taking place, but it’s hard to figure out which robot is which, and the screen ends up looking like a big mash-up of colours. Iron Man and War Machine’s final stand-off against Whiplash’s army is very similar with it being almost impossible to differentiate between the good guys and the bad guys. At least the red and gold of Iron Man’s suit stand out more, but War Machine gets lost in whirlwind of grey. The final climatic scene is over far to quickly as well, and leaves you wondering if that is really it.

Overall, you will enjoy Iron Man 2, but those expecting it to be as good as the first will be disappointed. I would recommend you go see it, but maybe take a book for the boring middle section.