Tired of those boring computer/English voices on your car’s GPS device telling you where to go? Well, now you can ride in style (nerd style) with new Star Wars voices for TomTom devices. The company has even launched an online game you can play to win a TomTom GPS device with one of the characters’ voices pre-installed. Hit the jump for more!

That’s right, for the low price of $12.95, you can have Darth Vader tell you how to get to work. TomTom has offered other distinguishable voices before, including Homer Simpson himself, but this summer, they are rolling out four different Star Wars character voices for their GPS devices. Vader is available now, while C3PO, Yoda, and Han Solo will be ready soon. You can test out a few of the Darth Vader commands on their website to see if you are ready for the Dark Side.

Speaking of Vader, the Dutch automotive navigation systems company has used him in a funny viral video that has already gotten over 600,000 hits on YouTube this week. Check it out below.

TomTom also has a augmented reality game where you can test your powers of the force under the guidance of Darth Vader or Yoda. You try to move a TomTom GO with the force (i.e. your hand), and if you get over 60%, you are entered into a drawing to win a TomTom GO with 10 Yoda navigation commands. With a new drawing every week until mid-July, you have time to practice your skills. See the Terms and Conditions for more details. 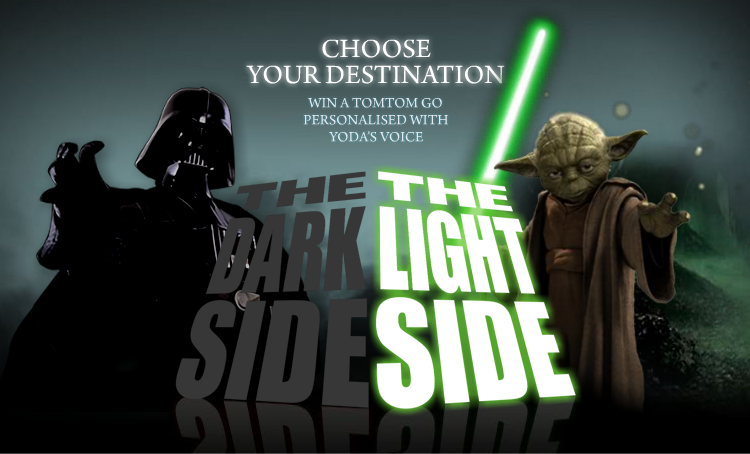