Last night Betty White hosted Saturday Night Live for the first time in her long entertainment career. Why did she get to host now? Because of a Facebook with hundreds of thousands of members calling for the 88 year old to host SNL. NBC announced she would be the host of the Mother’s Day special, which aired last night. The response so far has been overwhelmingly positive – many calling it the best episode in years. More after the jump.

The chatter online during and following the show was unanimous: Betty White delivered. Many people called it the best episode in years, other calling it the best episode ever. Personally, I think it’s the latter – but I’ve only been watching SNL for about 10 years. One thing is for sure, it was a memorable show. Here’s the chatter on the web: 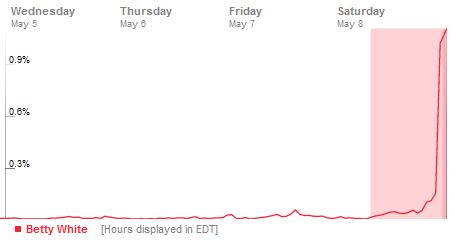 As the chart above shows, Twitter has exploded with tweets including the term “Betty White.” Here’s what some of those tweets said:
@GLfangirl20: Best SNL in a long long time it might be my favorite episode love Betty White.
@Cynthia_Rose: Betty White killed it on SNL! Thank YOU for being a friend Betty!
@SmashMe_EraseMe: Oh my GOD Betty White ****ing KILLED IT on SNL. That was goddamn glorious.
@raychela: The only walls strong enough to contain Chuck Norris? Betty White’s uterus.
@AdJoHa86: Betty White killed it on SNL, instant classic!
@AlyssaAllen18:  Betty white I <3 you best snl ever
@ElaineLiner: Somewhere in Showbiz Heaven, Bea Arthur is saying, “That goddamn Betty White!”

As you can see almost everyone thinks she delivered. And who expected any less? Betty White has been doing this for decades and no one expected any less from her. Jay Z performed a Forever Young and dedicated the song to “the most incredible, Betty White.”

What did you think of Betty White hosting SNL? Sound off below in the comments.