I, like many people I know who watch the History Channel, am a fan of World War II history. Did you know that SS Officer and civil engineer Hans Kammler made a breakthrough in anti-gravity that allowed the Nazis to escape to the moon in late 1945? Did you know that they created a military base, with the intention of coming back to take over the Earth? Oh, you haven’t? Well, maybe because that’s the premise of a new Finnish film called Iron Sky coming out next year. We have an exclusive interview with director Timo Vuorensola, as well as some of the viral background of the film, after the break.

You may not have heard of Vuorensola or Energia Productions, but the studio has a strong following. Their free online series Star Wreck, a Star Trek parody, has gained cult status around the world, and the feature Star Wreck: In the Pirkinning was directed by Vuorensola. They have used that leverage on their next film, Iron Sky, a science fiction comedy, by using supporters to gain a large portion of their $6 million budget. The film centers around the Nazis building an invasion fleet and coming back to Earth in 2018. See the trailer below.

The crew used their fanbase and some creative processes to gain financial support. First, there’s Wreck A Movie, a crowdsourcing platform that uses the power of the Internet to pull together resources to complete a project. The site was created by Star Wreck Studios, and covers anything from features, to shorts, to even operas. The Iron Sky makers also use their well-designed website, IronSky.net, to gain support in many ways. They allow fans to follow the process step-by-step, shop for merchandise, and even invest in “war bonds” that are basically donations that give you some cool stuff in return. They keep everything in that WWII style, including their banners and images. This will be the first production they distribute in theaters, so you can “Demand It” to be shown at your local theater.

The most interesting way Energia has gain support for Iron Sky has been their viral campaign. They created a March 29, 2018 edition of a fake newspaper titled The Truth Today, which you can read online. There are stories that link to the events in the movie, as well as random articles that are just there to give it a comprehensive look. They are all worth a read, as many give you a bit of a chuckle. Earlier in the year, they actually make hard copies of the paper and distributed them in classic Newsies-style at the Berlin Film Festival, as seen below. The paper even caused a stir online when a few forums started threads about how scientists had found a Swastika on the moon. Though they thought it was real, they didn’t realize they were linking to a story from The Truth Today. That’s a good sign your viral is working. 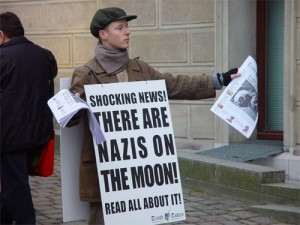 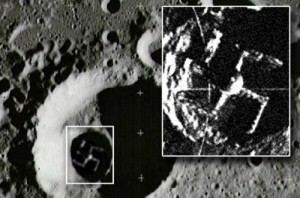 In the following interview, director Vuorensola talks about how they came up with the idea for Iron Sky, their crowdsourcing website, the effect Star Wreck has had on them, and the viral campaign they have used to fundraise for Iron Sky. Listen in below.

Help The Nazis Return to Earth in “Iron Sky” Sequel

Help The Nazis Return to Earth in “Iron Sky” Sequel