Tonight was the night where we learned a bit about the Island’s past on ABC’s LOST. Like usual, we got more questions thanks to the answers, but there was one moment where we finally learn the writers knew what they were doing all along. Check out our full recap and review of “Across the Sea” after the break.

We start with a pregnant woman, Claudia, washing up on the Island along with wreckage from an old ship. Another woman (played by Allison Janney), who we’ll name Eve (you’ll see why later), finds Claudia and takes care of her. Eve is guarded about her background, but she has a nice dwelling in a cave. Claudia wants to find the others who were on her ship, but she goes into labor. Eve gives birth to a boy, who Claudia immediately names Jacob. Then, unexpected to both, Claudia gives birth to another boy, who she doesn’t have a name for. Eve immediately fawns over the newborns, then kills Claudia by smashing her head in. LOST.

Next we see the kids when they are around 13 years old. Man in Black finds a game called Senet, very similar to Backgammon, which is an obvious reference to the game Locke played in the pilot and afterwards). Man in Black somehow knows the rules and teaches Jacob. Apparently Eve left the game for him to find, and when she talks to him later, she tells MiB that there is nothing beyond the Island, and that death is something he’ll never had to worry about. Later, the boys are hunting a boar when they find some men who kill it first (they look like Vikings, so I’m guessing this takes place over 1,000 years ago). When they go back to tell their mother, she warns that they are dangerous, and they aren’t supposed to be here, only Jacob and MiB are. She explains that their purpose is to protect a light source she shows them. It’s a cave with water streaming down into the light. She also explains that she “made it” so that the brothers can’t hurt each other. No one else can find the light (it’s a source of life), because if they do, the light goes out, it goes out everywhere.

While the brothers play Senet, MiB sees Claudia, though Jacob cannot. He follows her to a village, and she explains how she is their real mother, Eve killed her, and that those are their people in the village, and they are from beyond the Island (across the sea). MiB goes back to the cave to try to get Jacob to leave for the village with him, but he won’t leave. Eve tells MiB he isn’t able to leave the Island, but he leaves for the village anyway. Jacob chooses to stay, even though Eve admits to killing Claudia so he could stay “good.” Jacob thinks Eve loves MiB more, but she says she just loves them differently. 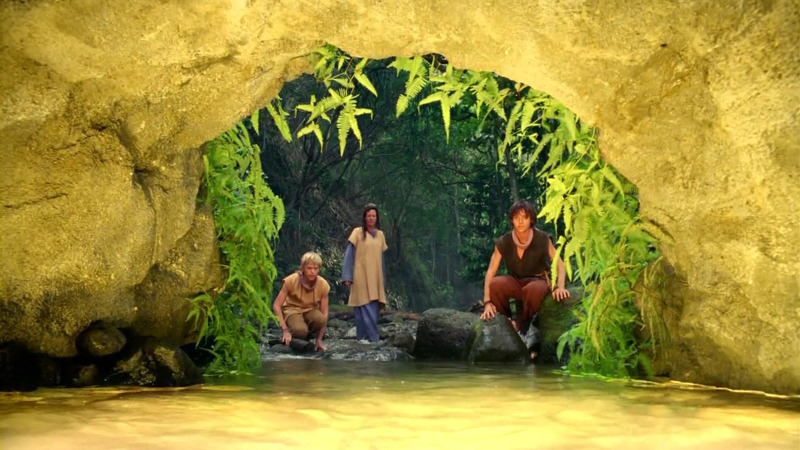 Finally, the twins are the age we are used to seeing them, and MiB is still with the village. Jacob looks over the village from time to time to see if they are really as evil as Eve claims. The two play Senet and MiB confirms they really are evil, but he’s using them as a way to get off the Island. They have found places on the Island with magnetism, and they dig to learn more. This time they finally found something. Jacob tells Eve, and she goes to see Jacob inside the digged well. He tells her he’s been looking for that light ever since, but can’t find it. Now he finally has, as he pulls away a rock in the wall to reveal a beam of light. There is a wooden wheel (seen in “There’s No Place Like Home” and other episodes) sitting against the wall that they plan to put into the rock to control the stream of water and light, thus getting him off the Island. Eve asks him how he knows all of this, but he doesn’t really answer. She says goodbye then hits his head against the wall, supposedly killing him.

Eve tells Jacob that “it’s time”, so they go to the light cave, and she tells him it’s his time to take over from her in protecting the Island. Jacob says she wanted MiB to do it, but she says she realizes now that it was him all along. She whispers a chant and pours him some wine from the wine bottle Jacob has in “Ab Aeterno”, which officially makes him “like her” and the new protector. MiB wakes up, finds the well filled in, his people killed, and the village burned down. He finds his game and is pissed. MiB finds Eve in the cave and kills her (to which she thanks him), then Jacob finds him. He takes him to the light cave and throws MiB down it, which causes him to turn into Smokey, since it comes roaring out of the cave. Jacob later finds MiB’s dead body and places it in the cave with Eve. Thanks to some flashbacks to an earlier episode, we realize that the two bodies Jack and Kate found in the cave are MiB and his mother, with Locke calling them the Adam and Eve of the Island.

So, we learned alot in this episode, but there are still some questions. There’s an interesting theme that continues here, where pregnant women who come to the Island have their babies stolen and/or raised by someone else. The tapestry we see Jacob doing when we first met him is something we now see he picked up from his mother. When MiB (as Locke) talks to Kate about his crazy mother, he was telling the truth. The wine bottle is not just symbolic, it actually has powers, which is how Richard became immortal. However, MiB destroyed it, so how will Jacob pass on his responsibilities now? Eve obviously knew more than she says in the episode, and even seemed to predict MiB killing her. She must have known it was her time. Exactly how the “you can’t kill so and so” and “you can’t die” things are still unclear, but so is how the light cave turned MiB into the smoke monster. Also, it’s interesting that the new MiB is NOT Jacob’s brother anymore, though the personality still seems the same. Did the soul transfer to the smoke? Let us know all your thoughts in the comments below.

To see Corey’s take on the episode, check out his tumblr page. Next week, he’ll be reviewing “What They Died For”, the last new episode before the season finale!