The final chapter in the Dreamwork Animation’s Shrek franchise, Shrek Forever After, was released this weekend. While the box office may have already declared the film a success (if only timidly), the real question is how good is it? Is it better than Shrek The Third, which some people felt was a bit of a let down? Find out my opinion after the break.

Shrek Forever After is the fourth and final film in the Shrek series. After saving Princess Fiona (voice of Cameron Diaz) from the tower, breaking her spell with true love’s kiss (which turned her into an Ogre), Shrek (Mike Myers) marries Fiona and lives happily ever after with triplets and his friends Puss in Boots (Antonio Banderas) and Donkey (Eddie Murphy). Or does he? On the kids’ first birthday, Shrek finally is fed up with living an annoying lifestyle that has completely emasculated him. He longs to be a solitary Ogre who people still fear. Fortunately, Rumpelstiltskin (the master of magical deals) has a solution. Give up one day of his life to live one day as the true Ogre he wishes he could be. 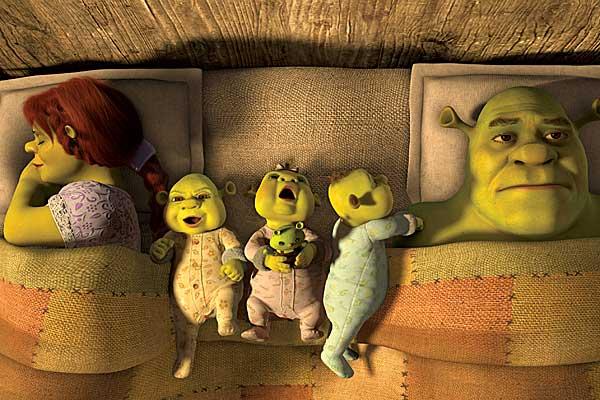 Of course, things do not go as planned, as Rumpy’s deal is really a trick that allows him to rule Far Far Away with his witches by his side. He makes it so that Shrek never saved Fiona, thus her parents sign away the kingdom to the trickster. Also, Shrek can’t go back to his own time unless he can, yet again, get true love’s kiss. However, that’s not going to be easy, as Fiona, who broke herself out of the tower and is leading an Ogre rebellion, doesn’t even know Shrek in this timeline.

While Shrek The Third was a bit of a downer film for me, Shrek Forever After finds a way to keep the atmosphere light during dramatic moments, which played much better this time around. The sharp wit of the first two Shrek films is back, and is one of the reasons I love this franchise so much. The side characters are the other main reason, and they really shine in their limited roles this time around. The Three Little Pigs really steal the show in their scenes, though I miss the plethora of fairy tale references we got in the original. Of course, Donkey and Puss in Boots (as an overweight retiree in the alt universe) are great as usual, and I can’t wait for the cat’s spinoff. Rumpelstiltskin is a solid villian, and though they only touched on it, I kind of understood where he was coming from in his diabolical plan.

All in all, this was a fitting end to the Shrek saga, as we get to see Shrek finally appreciate his happily ever after. I even got a little teary-eyed near the end. Don’t judge.