After weeks of poking and prodding, a small break has finally been made on the remote computer desktop seen on Scariest Thing I Ever Saw. While this may not be a huge step in Super 8 viral, at least it’s something to tide us over until the Rocket Poppeteers website (hopefully) launches. Get the details on what was found after the jump.

Thanks to the work of the Unfiction crew, a folder named “Braegen14” has been found on the PDP-11 computer that supposedly belongs to an Air Force officer named Dan Morris. It has recently appeared on the desktop behind the two windows that we have come to know and love. The folder has one file called “expcnv.dat”, and when you type “.EXEC EXPCNV” into the command prompt, you get asked to provide an external source. When you enter “/desktop/Braegen14/expcnv.dat”, you hear an eerie audio file, which you can download here.

What is this audio file, why is it here, and what is Braegan14? As far as the folder name, Super 8 News found what looks to be a brand called Braegan that made some kind of disk drives that worked with PDP-11 computers as part of a digital editing system. I was unable to find much more, but there are vague references to audio editing throughout Google. 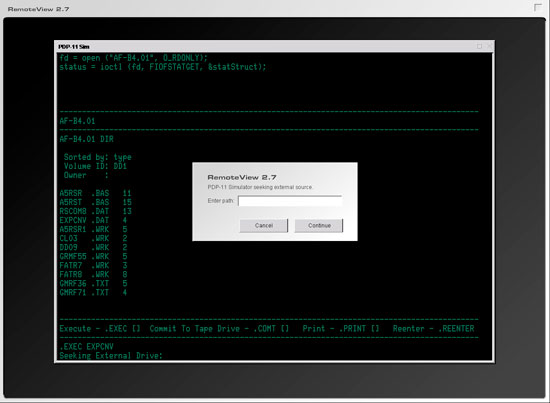 This all sounds good, but it could just mean the guys behind the viral wanted to have an authentic name for the disk drive, similar to how USB flash drives today will commonly show up on your computer as the vendor’s name and the drive’s capacity (i.e. Kingston 2GB). However, I did find it funny that the CEO of Alien Technology used to work for a Braegen Corporation.

OK, let’s focus on the real find here: the audio file. It sounds like a vinyl recording of electronic notes. This reminds me a lot of Steven Spielberg’s Close Encounters of the Third Kind, which is fitting in many ways. First, J.J. Abrams has said the film is meant to be homage to Spielberg’s sci-fi films of the 70s and 80s, including Close Encounters. Also, in the movie, the aliens communicated with musical notes. Check out the scene that features the motif below.

Could this be the sound of monster/alien trying communicating? Did Morris record it in Area 51? What is the thing trying to say, if that is even important? There are much more questions than answers, and if we find anything, we’ll let you know. Follow our coverage through our Super 8 Viral Page.
J.J. AbramsScariest Thing I Ever SawSteven SpielbergSuper 8