The 14th Annual Webby Awards were held on Monday, and, like usual, a few mainstream entities took home some trophies. The two most notable winners were The Muppets and True Blood. B.J. Novak, who plays Ryan on NBC’s The Office, hosted the event. Get all the details after the break.

The Webbys were established in 1996 by the International Academy of Digital Arts and Sciences to honor excellence on the Internet in a variety of categories. The four main sections are “Websites”, “Interactive Advertising”, “Online Film and Video”, and “Mobile”. There are way to many categories for us to cover, so for the full list, head over to the Webbys homepage. Every category has the actual Webby Award winner and a People’s Voice Winner, which is chosen by the public in true Internet fashion. 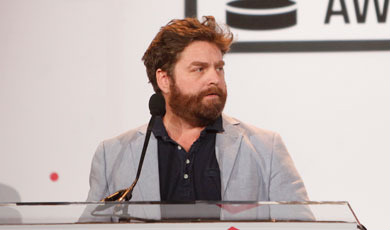 HBO had a great year, as they took home several awards in Websites, as well as the People’s Voice for Integrated Campaigns for True Blood. Nice to see a viral campaign get some love. Of course, the “Online Film and Video” section alone is too large to break down, but notable winners included College Humor and Funny or Die for their comedy videos, David Lynch for his documentary series, and the Muppets in the Music and Viral categories.

Amy Poehler (Parks and Recreation) won Best Actress for her online series Smart Girls at the Party, while Zach Galifianakis won Best Actor for Between Two Ferns with Zach Galifianakis. In one of the top honors, critic Roger Ebert was named Person of the Year. I was surprised to see the film viral campaigns of last year (District 9, 2012, etc.) not even nominated considering the bevy of categories. Congrats to all the winners, and hopefully we’ll see Tron Legacy and Super 8 in next year’s event.
Amy PoehlerDavid LynchHBONBCParks and RecreationThe MuppetsTrue BloodWebby AwardsZach Galifianakis