Early last month, we told you about how Disney was looking cross-promote the upcoming Tron Legacy with their Disneyland California Adventure park via a nighttime show of some sort. Now we have a few more details on the show, to be titled “ElecTRONica” (clever, no?), as well as pretty crazy concept art. Check it all out after the break.

As we stated in our first story, “the nighttime show will be in the Hollywood Pictures Backlot and main entrance, and might be similar to the current nighttime party that features a moving bar and light up cups.” However, calling it a ‘show’ may not be appropriate, as it now looks like Tron Legacy will basically take over the entire HRB, and even include a Flynn’s Arcade! Starting October 8th, visitors can see the transformation on weekends, and between Thanksgiving and Christmas it’ll be every night. Read the official announcement from the Disneyland blog below, then take a look at the concept art, which looks too good to be true (click for full size).

Beginning October 8, the interactive, digital world of “TRON: Legacy” will light up Hollywood Pictures Backlot as we gear up for the film’s release on December 17. This will be a cool opportunity to peek inside the world of this movie, and it’s available only to visitors of Disney California Adventure park.

It’s an “electrifying” experience for the entire family, filled with music, lights and some of your favorite food and beverage, all set amidst the captivating world of “TRON: Legacy!” From a dazzling dance club under the stars to an authentic recreation of Flynn’s Arcade to some radical gaming, it’s like nowhere else on the grid! Each night, we’ll feature live entertainers, complete with lasers, glow accessories and the hottest music ever to rock the grid. ElecTRONica is “the” place to dance the night away in a fantastic world that only Disney can create. Highlights for the entire family will definitely be Flynn’s Video Arcade, face painting and the TRON: Evolution video game area.
ElecTRONica will transform Disney California Adventure park Fridays, Saturdays and Sundays this Fall. TRON fans and families can also enjoy the party seven days a week during Thanksgiving week and Christmas week.
Stay tuned to the Disney Parks Blog, as we’ll be sharing additional details soon, and if you want to stay up-to-date with the latest happenings on ElecTRONica, follow us on Twitter, @Disneyland. 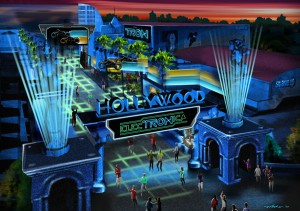 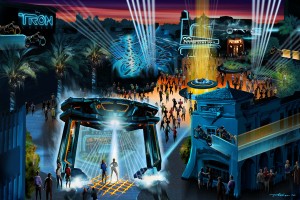 What do you think about ElecTRONica? Will you take a trip to Anaheim, CA just to see it?