While the latest flare in the Super 8 viral campaign has been the updates to the Rocket Poppeteers website (along with the ice cream’s presence at Comic-Con), there’s still that pesky remote computer on Scariest Thing I Ever Saw (STIES). The PDP 11 computer now has a new print out and an interesting audio file that’s in its own folder on the desktop. Get the details after the break.

For those who don’t need to catch up, skip to the embedded audio file and print out below. For those who need a refresher, continue on.

In J.J. Abrams’ Super 8, some “thing” escapes from a military train going from Area 51 to a base in Ohio in 1979, and it is captured on a Super 8 camera. In the ARG for the film, we have this PDP 11 remote computer (on STIES) that belongs to a D. Morris. After some investigation, we believe it may be for an Air Force officer named Dan Morris who was part of Project Disclosure, which had to do with getting the government to own up on their knowledge of UFOs. How the Rocket Poppeteers ice cream brand plays into all this, we don’t know yet.

We do know there is a Josh Minker in West Virginia who recently tried to sell some of his recently deceased mother’s things on Craigslist. We found this out because one of the PDP 11 computer’s command options was to print. The print out (whose text changes periodically) showed a picture (seen in the print out below) that has some items in the back that match Minker’s objects. Minker has a blog, so his character is based on current time. The updating email messages on the print out must be modern time as well, as a strange figure is contacting Josh about some object that has to do with his father (Dan Morris, maybe?). We still don’t know what the object is, but it is probably in one of the Craigslist photos. It looks like Minker might have found his dad’s old computer while cleaning out his mom’s place and stumbled onto to something, possibly the Super 8 footage of the creature. 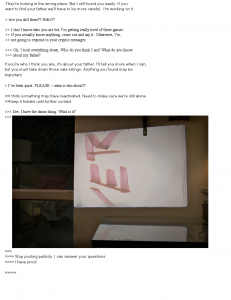 The print out is just updated to have the mysterious figure tell Josh to hang tight. The audio, featuring unknown men talking, is more interesting. You can go to Unfiction for really in depth breakdowns and theories on the clip, but here’s what it sounds like the guys are saying:

Sorry, I didn’t see him back there.

Do you think there’d be any in back?

This sounds like a retail location to me, with a customer/client asking for something for which the place is out of stock. It’s hard to tell. What do you think they are saying, and what is the context?

Follow our coverage of the Super 8 viral campaign here, and follow all our news on the super-secretive Super 8 (which is also being produced by Steven Spielberg) here. The film is set for release in Summer 2011.