New York Comic-Con (which is not officially related to San Diego Comic-Con or Comic-Con International) was held last weekend, but it wasn’t until the end of this past week that someone came forward with what appears to be a Rocket Poppeteers poster. Is the “Slusho!” of the Super 8 viral campaign back in action?

The person (who can be found on the Super 8 News Forum) claims to have gotten the poster at New York Comic-Con and didn’t think to say anything until four days later despite knowing about the Super 8 News site. Suspicions aside, this seems like something the Super 8 campaign would do, as Rocket Poppeteers, the ice cream brand that has an unknown role in the viral or film, surprised everyone by making an appearance at San Diego Comic-Con.

While the style of the poster is a little different than what we’ve seen so far, it’s very detailed both in artistry and wording. It still has that animated look, and those omnious galaxy eyes up top are pretty frightening. There are some concerns about its authenticity, but I think that’s just people being paranoid. Take a look at the poster below, and head on over to Super 8 News for a few more that have a closer look. 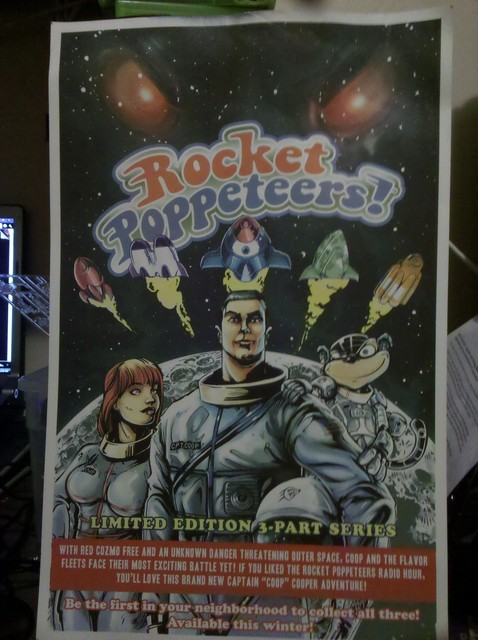 Be sure to check out our Super 8 Viral Page for more coverage.
New York Comic-ConRocket PoppeteersSuper 8