Darren Aronofsky’s Black Swan looks to be a pretty demented film (as is par for the course with the director). In it, Natalie Portman plays a ballerina trying out for ‘Swan Lake’ who starts to turn into a swan herself. A viral website debuted a few weeks ago, and now it has been updated with a secret video.

If you go to IJustWantToBePerfect.com, you’ll see the calendar that counts down to “opening night”. Each date has a quick video you can watch from the film, but a new discovery was made recently. If you type any letter while on the site, that letter pops up on screen. More importantly, if you type in “Rothbart”, the name of the villian in ‘Swan Lake’, an intense secret video fills the screen. So far no other words have been found to show videos, but definitely try it out for yourself to see what you can find. 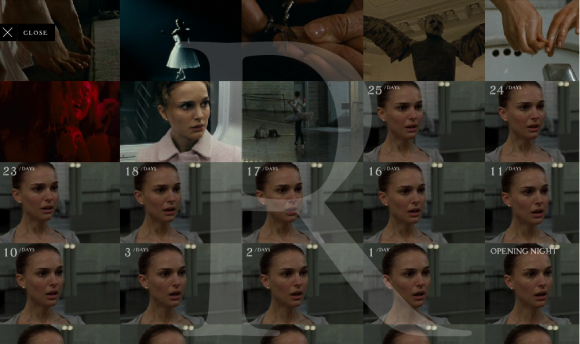 In related news, Alex from FirstShowing received an envelope in the mail from Portman’s character Nina Sayers. In it, there are a black and white feathers, and nothing else. What could it mean? Check out his post to see a picture. We’ll keep you up to date on any more viral news from the film.