I have to admit, I’m not the best at keeping up with the Harry Potter phenomenon. I haven’t read any of the books, and I have only seen the first five out of the six films that came before the two part ending that is Deathly Hallows. Would that hinder my appreciation or comprehension of the final chapter of the most successful film franchise in history? Find out after the break.

In the 7th movie of the 8 movie franchise, Harry Potter and the gang are in a dark place. Professor Dumbledore is dead, and now Lord Voldemort and his crew are growing stronger, including taking over the Ministry of Magic. The only way to stop Voldemort is to find all the Horcruxes, which are objects that contain part of his soul, thus giving him immortality until they are all destroyed. Two have already been dealt with (Tom Riddle’s diary and his mother’s ring), and now Salazar Slytherin’s Locket is next on the checklist. However, Voldemort and the Ministry are after Potter, so he eventually decides to find it himself along with Hermione and Ron.

As you may expect, there is a lot going on. The film’s main plot is pretty straightforward (Potter and crew need to find, then destroy, the locket while evading pretty much everyone), but with six previous films worth of back story and dozens of characters, it can be difficult to keep up. To fully appreciate the film, you should consider a Potter marathon/study section. 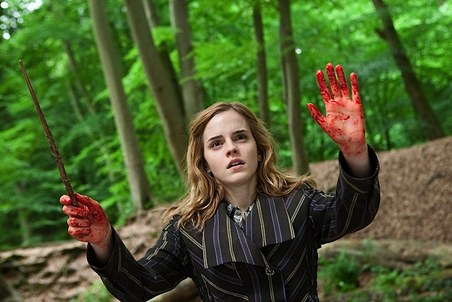 That being said, this might be one of the best films in the series. I was able to follow along even with my gaps of knowledge, and the drama felt real. You could really sense that the end was coming. The tagline “We’re not at Hogwarts anymore” would fit perfectly, as we encounter deaths, torture, sensuality, and great action during this epic journey. The young characters have to deal with some very adult situations and the actors are so comfortable with their roles that they are able to portray these interesting dynamics perfectly.

That’s not to say there isn’t some fun along the way. We get some great humor to break up the often serious tone, and Dobby easily became my favorite Harry Potter character ever. The plot looks to follow the book pretty closely (based on Wikipedia research), with the split in films coming at what appears to me to be the perfect place. The Deathly Hallows story itself is told via a great animated sequence.
Final Thoughts: Harry Potter and the Deathly Hallows Part 1 is a great addition to this great franchise, though this is not a kids film (as proven by an awkward sexual hallucination by Ron). That may be why I like it so much, since the films have grown with the audience. With all the magic and forests, I couldn’t help but to think that this is what the Twilight series should strive to be. However, if you are not familiar with the Potter back story, beware of confusion, as the film doesn’t take kindly to strangers.