For those that have been following the TRON: Legacy viral campaign, you will recall we posted about the Arcade Aid challenge being updated with a bigger portion of the map for gamers to complete. Gamers that completed this challenge received a pretty good prize which entailed two of four pins depicting images from the map. These four pins included a Tron Guard, a Light Cycle, Face Off, and Punch Out. To see and hear more, follow the break.

In addition to these pins being sent out, the first 999 people to complete this challenge were mailed an even better prize than one could imagine. Gamers received complete posters of the entire city scape from the challenge numbered with a silver sharpie. Along with the poster there was a note which said “Feels good to be totally done, right? Right? P.S. Right?” hinting at something more to come.

Following up from that little clue received with the poster were more updates on the Flynn Lives website. The site updated with a post about the posters being sent out, and almost immediately gamers knew something was up. The image showed in the post was nowhere to be found in the posters, so after looking at it for a while the picture was deemed a clue and finally deciphered to ArcadeAid.com/bonuslevel. By going here, gamers were greeted with 9 different files which included a clue from the poster and a blank circle. After an hour or so of printing the pages, placing them, and trying to decipher what we were being told, the guys over at unfiction were able to figure out the list of what was in the circles. That list included ChuChu Rocket, Home Run, Operation Wolf, Pool Shark, Prey, Excite Bike, 50 Cent bulletproof, 720, and Tiger Heli. 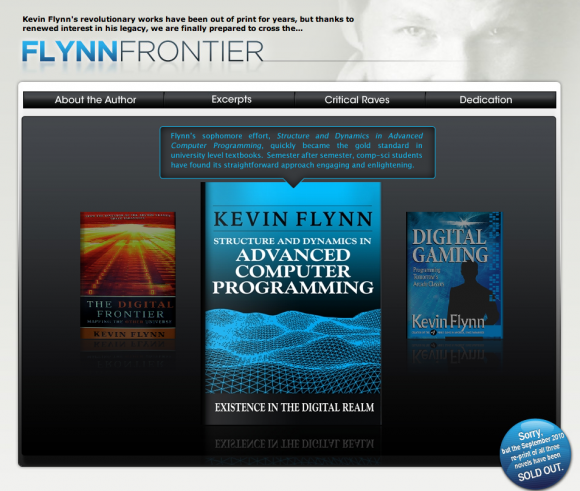 After another few hours they were able to discover after using the first letter of each game, they could spell out a website. That website came out to PopTech75.com. When you go here, you are greeted with a page from one of Kevin Flynn’s books along with a link at the bottom of the page. This link takes you to Flynn Frontier, the website which lists all of Kevin Flynn’s books that he has written. Here you can find reviews of the books, an about the author section, a dedication section, and a section with excerpts. With these excerpts you will find pictures of the books along with the bar code of the book. Again the smart folks at Unfiction discovered the number code when you scan the bar codes. You can enter these 3 number sequences at helloflynn.com/ to unlock 2 audio files and a picture from the Tron universe (seen above) that goes along with notes. Below is what the audio and notes say.

“Man, I have been through a profound life changing experience. Something so wonderful it’s hardly explainable. To paraphrase Oppenheimer, I have become life. Creator of worlds, man.”

“Evolution! Evolution is the greatest force in the material world. Evolution will provide us the next step in intelligent life. But it will come from somewhere unexpected.”

book.tour.salvation: I just started my book tour, but no matter how far I travel, I can’t seem to shake my demons. They seem to linger in my nightmares – half digital, half flesh. I’ve started leaving reminders of the man I once was: I need to rescue that Kevin Flynn and get back to being a father, a programmer.
This will require some engineering.

landscape.evolution: My latest foray into digital landscape architecture has left me both speechless and effusive, simultaneously.

Obviously the Tron viral is looking to go out with a big bang after the announcement of Endgame. With only one more month left until the movie hits theaters, I think this might be leading up to that one last POW we’ve been waiting for. We’ll be sure to keep everyone updated with everything that is going on with this viral so keep checking back for more as I’m sure there is going to be a lot more coming VERY soon.

Follow our complete coverage on our TRON: Legacy Viral Page.

UPDATE: The website for Hydecker Designs was also found. The building design company was behind the Encom International building, with Kevin Flynn’s wife Jordan Canas actually designing it. The Flynn Estate donated a blueprint of the Hedera Helix Building that includes another code for Hello Flynn. Typing in “329363554862” gives us notes that the building could have a design flaw that makes it unsecure. Not sure what this means at the moment.