TRON: Legacy Behind the Scenes Footage and Online Games

A few updates came across this weekend for TRON: Legacy. First, a 15 minute B-Roll from Collider (set to Daft Punk music, no less), and second, some online games have been added to TronGames.com (which is hosted by Disney). See it all after the break.

TronGames.com is an offshoot of Disney.com that offers five games set in the TRON world. One of the more interesting ones is called Tron Digital DJ, and it plays like a simplified Guitar Hero or Tap Tap Revenge (for the iPhone savvy) set to Daft Punk music. However, the game is rather hard. The other games are “Tron Light Cycle”, where you race through the Grid in a 3D environment, “Classic Tron”, “Discs of Tron”, and “Tron Legacy Disc Battle”, which looks like a cooler, more modern version of “Discs of Tron”, but is still shown as being “coming soon”. Check out all the games for yourself and let us know what you think of them.

TRON: Legacy opens nationwide on December 17th in IMAX 3D. We’ll have our review of the film up way before that, and if you want more information on the viral campaign for the film, go to our TRON: Legacy Viral Page. 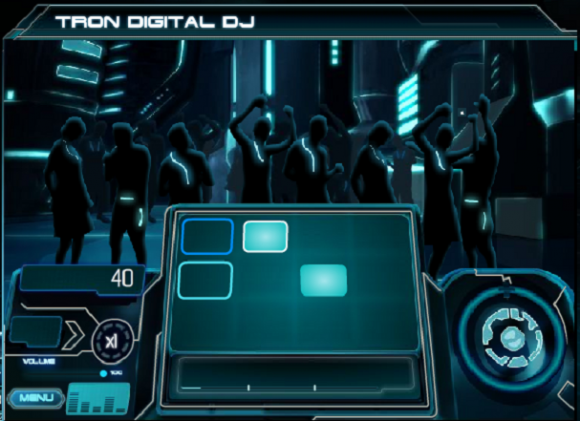