Sure, Thanksgiving isn’t until tomorrow, but aliens and computer programs need a day off too! Both of the viral campaigns we are following right now gave holiday updates, though neither seems to major (at least at first glance. What did they have to say? Find out after the break.

The primary viral website for TRON: Legacy, Flynn Lives, has one of the admins of the discussion board, Zack, simply posting a Happy Thanksgiving message on the main page: 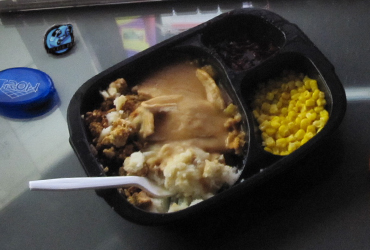 Over the past two years, we have re-organized, re-energized and re-galvanized our search for the man who brought arcade culture to the mainstream – and we’ve gotten this far because of you.

So, take a moment to appreciate one another – we are all seated at the same metaphorical dinner table, and we’re almost ready for the main course.

Catch up with you next week, everybody!
–Zack

The update for Super 8 seems to have a bit more potential. On the Hook, Line, and Minker site, Josh posted an update today that explains that he finally found a Coelacanth fish, and alludes to a “certain someone” that might just be a girlfriend:

Ok, it’s gonna be a GREAT Thanksgiving! I know some of you wont believe me, I have finally FOUND A COELACANTH. I know, I know, doubt all you want, I’ll put the photos up to prove it soon enough! One of my guysctually came through, and he promises he can deliver in early December. For all my searching, honestly, never thought I’d really find one. I thought they were just too rare – but it goes to show you what (possibly unhealthy) persistence can get you.

Needless to say, as soon as it arrives, I will keep you all up to date on my progress. Regular updates for sure. Just crazy. Major tank preparations are under way.

And thanks to a certain someone for being so patient through all this. I promise I won’t let it (majorly) interfere with our Thanksgiving plans. I promised a tasty, home cooked meal and I will deliver.

Josh has been looking for a Coelacanth for months, and he explains why in one of his early posts. The fish is extremely rare (it was thought extinct until 1938), but his obsession must mean something for the viral that we don’t know yet. There is a lot of speculation on the Unfiction forums about what this all means. The consensus so far on the site about the identity of the “certain someone” is his new boss Sarah, though that’s not much of a stretch considering no other living female characters have been mentioned in the viral.

Both virals possibly hint at upcoming updates. Zack says “Catch up with you next week, everybody!”, and Josh says “I’ll put the photos up to prove it soon enough!’. Hopefully this means we will see some cool stuff after the break, which may be expected for the rapidly approaching TRON: Legacy. However, Super 8 isn’t guaranteed, as J.J. Abrams likes to play tricks on us.

TRON: Legacy opens in theaters on December 17th, and Super 8 opens June 10th, 2011. Follow our coverage both both campaigns on through our Viral Pages.