“TRON: Legacy” Film Review: It Fights For The Users

We’ve been covering the viral campaign for Disney’s TRON: Legacy for over a year, and our readers know how much the film’s marketing has slowly saturated the site. Obviously, the real question is whether if the TRON sequel is worth all this attention. Find out in my review of this year’s most anticipated film in geekdom.

First, a little background on the original 1982 TRON. Kevin Flynn, owner of Flynn’s Arcade, a former game programmer who worked at software company Encom when fellow programmer, Ed Dillinger, stole his ideas for several video games that are now very popular. Dillinger got promoted and fired Flynn. Since then, Flynn has been trying to hack into the Master Control Program created by Dillinger to find evidence, but the program, which monitors all programs at Encom, grows more intelligent and blocks him out. Finally, with the help of Encom employees Alan Bradley and Lora, Flynn breaks into Encom, but when he tries to hack into MCP there, he gets digitized in the mainframe where programs are people that look like their creators. Once in this digital world, Flynn must find away to survive the games and destroy MCP, with the help of TRON, the program created by Alan as a watchdog for MCP. Flynn eventually gets out, gets his proof, and rises to the top of Encom.

TRON: Legacy picks up 28 years later. Flynn (Jeff Bridges) has been missing for years, so his son Sam (Garrett Hedlund) owns 51% of the company, but doesn’t want to take control. Unfortunately, this means that family friend Bradley (Bruce Boxleitner) has been pushed aside, and Encom isn’t the innovative, free-spirited company Kevin had tried to make. Bradley gets a message from the arcade, so Sam checks it out. While accessing the computer in a secret office behind the TRON game machine, Sam gets digitized himself into a new computer world. There, he too must survive the games, though in this world, Clu 2 (Flynn’s program) is in control. Kevin Flynn’s apprentice Quorra (Olivia Wilde) saves him and takes him to his father. There we learn about the world Flynn was trying to create and how it became corrupted thanks to Clu 2, leaving Flynn a refugee on the outskirts of the Grid. The only hope they have of overthrowing Clu and rescuing Flynn is to get to the portal to the real world, which closes in just a few hours, but is on the other side of the Grid.

I’m a fan of the original TRON, even if the graphics and costumes are infamously dated. The idea of a digital world we didn’t know existed is fascinating. TRON: Legacy takes that concept to a whole new level, as Flynn has bigger ideas for what to do with his creation. With newer effects and a deeper mythology, there’s a lot to take in, and it gives the characters (both good and “evil”) more meaning behind their actions. The final confrontation between Clu 2 and the Flynns actually makes you feel bad for the program. We learn about what causes the rift between Kevin and his program, which happens to be the “miracle” that we hear about both earlier in the film and in the viral campaign. 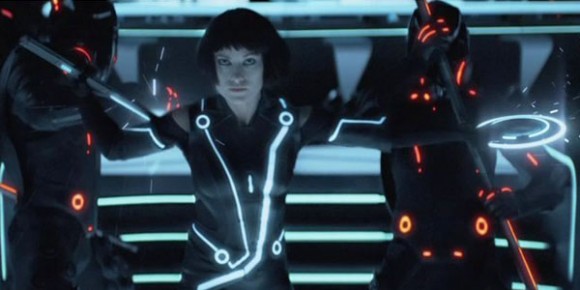 Needless to say, the visuals are the one aspect of this film that will blow you away. Seeing it in IMAX 3D (as I did) is truly the only way to go, and the screen is engulfed in a beautifully dark landscape. The incredible soundtrack by Daft Punk also deserves the IMAX treatment. The games are the highlight of the new graphics, with a great light-cycle sequence that blows the original out of the water. I was even impressed with the computer animation of Clu 2, who is meant to look like an un-aged Flynn. Sure, there were a few moments where it went a bit Polar Express, but otherwise, it’s hard to complain.

However, the superficial aspects of TRON: Legacy are not the sole reason to see this film. The acting is great, with Bridges picking up right where he left off in the original, playing what looks like a genius-Lebowski. Boxleitner brings a poise and humility that lets you know Sam had a good role model growing up in Alan, and, maybe more importantly, that the program TRON (which makes a too spoilerific appearance in the film to talk about in detail) has a noble backbone. Clu isn’t as annoyingly robotic as in the original, and in fact has a certain rage behind him that makes him fun to watch. Hedlund does a solid job as Sam, though I felt he was having just a bit too much fun with his life (and father’s) on the line.

As mentioned before, the mythology continued and created in the film show that Disney isn’t just in it to give you one big splash of pretty colors. There’s a lot brought over from the original outside of the machines, ranging from major themes (digital world having potential for perfection) to even lines of dialogue (Encom must have a thing for big doors). We know there’s a sequel in the works, and the writers obviously went out of the way to make sure there were some loose ends and themes to touch on in new stories. Unfortunately, those loose ends were sometimes obvious, such as when we see an early cameo that harkens back to the original TRON yet is never touched upon again. Also, the background information is a bit confusing, and several things aren’t fully explained, such as Clu 2’s master plan that the Flynn’s find out near the end.

Overall, this film is a must-see for any TRON fan. Fortunately, if you haven’t seen the original, you’ll still understand and appreciate Legacy, especially thanks to the exposition in the beginning. The great visual effects and music will give your senses a treat, but the potentially extensive mythology and interesting characters will treat your brain.