Quite often on the Internet, random videos spread like wildfire. It can be hard to predict, but once people latch on, it’s not hard to find. A great example of this is a Louisiana news report that made the circuits on Friday. NBC 33 in Baton Rouge had a picture of some ghostly creature in the woods of Berwick (just south of the capital). However, there are now claims that the image is part of the viral campaign for Super 8. Get the details after the break.

In the video below, you can see the report for yourself. The reason it initially went viral was because it’s both scary (thanks to the image of the ghostly figure in the woods) and funny (the way the news channel covers it). Obviously, viewers have been skeptical of the authenticity of the image and it’s backstory, especially since the person behind it wanted to stay anonymous. Supposedly, the man’s friend’s family (red flag #1) found a hunting camera damaged, but the SIM card intact and with an image of some kind of demonic humanoid figure. The photo itself looks to have first showed up on the Facebook page for Wildgame Innovations.

Conspiracy theories have run wild, but MovieWeb thinks it has gotten to bottom of it. Despite claims this the photo is from a real event in Louisiana, it is supposedly a viral image for Super 8. This is according to “inside sources close to the production”, and they’ve even got a video of girl talking about her role in a particular scene of Super 8.

In the scene, the little girl in question is said to be trapped on an airplane with her mother, where she comes in contact with this scary creature, which the young actress refers to as “a zombie”.

Below I’ve included the video along with both the original image posted online and one in which I’ve maximized the color settings so you can see more. Let us know what you think. Is this really the monster from Super 8? I have my doubts. 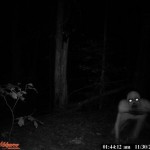 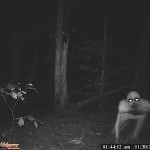 For more information on the J.J. Abrams-Steven Spielberg collaboration, check out our Super 8 Viral Page.