Yesterday morning we brought you the story of the Louisiana Forest Monster and how one of the theories behind it is that it’s somehow part of the Super 8 viral and is actually the monster from the J.J. Abrams film. I was pretty skeptical about it, and now I have found two other theories behind the image, though even those are questionable.

PlayStation Lifestyle reports that it may be a viral image for the upcoming game Resistance 3 because of a tweet on Friday from Insomniac Games that links to an article about the image:

Whoops… looks like one got out. If you see a Grim on the loose… please return to Insomniac Games, Burbank, CA: http://bit.ly/fqGoXX #fb

The Grim creature in the Resistance series does look vaguely like the demon in question, despite having way more eyes. However, I took this to be more of a joke, and Insomniac Games has yet to follow this up with any explanation. 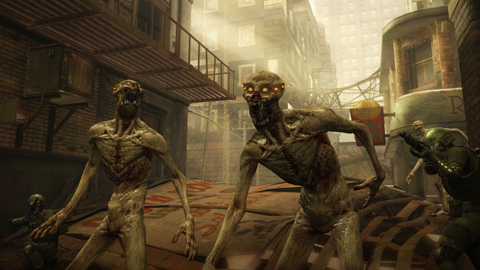 Another blog (thanks to PDXJ in the comments from our original article) takes the investigation further and seemingly finds Internet postings from the camera owner, though even he doesn’t have an explanation for what’s on the image. Wired Web also goes into detail about the evidence that the picture is Photoshopped from an earlier real picture taken from the camera. Any professional marketing ploy would have probably been able to hide such evidence.

Still, none of this is definitive, so we’ll keep an eye out until we hear yet another new theory. What do you think is the truth?
Louisiana Forest MonsterResistance 3Super 8Video Game