While I find that end of the year top ten lists can get monotonous after a while, I’m always intrigued by analytical lists, which are backed by numbers, not opinion. Quenching my analytical thirst, Twitter has compiled their most popular trending topics into categorized top ten lists, including one for the most tweeted movies of 2010. Check out the list and see why one film’s inclusion just doesn’t make sense after the jump.

You can view all of Twitter’s top ten lists at Twitter 2010: Year in Review, but we have included their top ten most tweeted films below:

1. Inception (#3 overall)
2. Harry Potter and The Deathly Hallows (#9 overall)
3. Scott Pilgrim vs. the World
4. Despicable Me
5. The Karate Kid
6. The Last Airbender
7. The Twilight Saga: Eclipse
8. The Expendables
9. The Chronicles of Narnia: The Voyage of the Dawn Treader
10. Paranormal Activity 2

There aren’t too many surprises on this list, as most of the films had great box office performances. According to BoxOfficeMojo, seven of the ten films on the list grossed over $100 million, while Paranormal Activity 2 and The Chronicles of Narnia: The Voyage of the Dawn Treader each finished number one at the box office on their opening weekends. 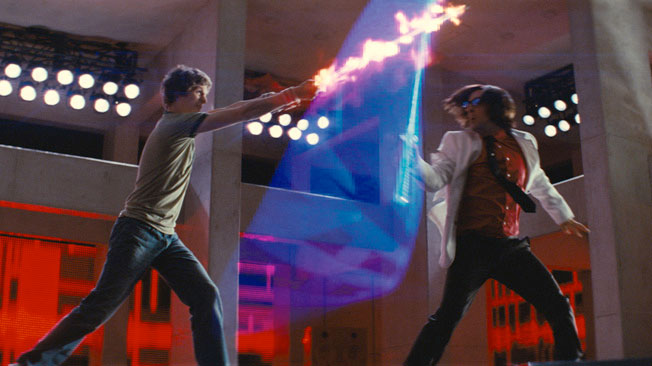 The lone anomaly of the list of course,  is Scott Pilgrim vs. the World. Despite being the third most tweeted movie, Scott Pilgrim had a disappointing domestic gross of $31.5 million. While I am certainly not arguing that trending power on Twitter correlates to box office success, a film that failed to capitalize on undeniable word of mouth continues to confound me. Did director Edgar Wright and series creator Bryan Lee O’Malley’s active Twitter presence create a false sense of hype? Were all of the tweets about the film negative, and drove people away from the theater? I doubt it, but this list is a good reminder that word of mouth buzz doesn’t always guarantee box office success, which is particularly disappointing in this case, because Scott Pilgrim was a darn good film.

If you have any thoughts of this top ten list, or where Scott Pilgrim went wrong, be sure to include them in our comments section.
Chronicles of Narnia: Voyage of the Dawn TreaderEnd of YearParanormal Activity 2Scott Pilgrim Vs. The WorldTwitter