This may come as a surprise to you guys, but I know very little about the Warhammer 40,000 mythology. That aside, I REALLY enjoyed Ultramarines: The Movie. Despite being a straight-to-DVD CGI film, it’s particularly well done. But before I go into specifics in my review, here’s the plot of the movie in a nutshell.

“Ultramarines” is set in the far, far future, where Earth has become an empire and is at war against evil forces from across the universe. A distress signal is sent from the planet Mithron, and is received by Captain Severus (Terrance Stamp), leader of the elite group (or, “chapter”, as these teams are called) of Space Marines known as the Ultramarines. Responding to this apparent cry for help, Severus and his loyal crew land on the planet in order to find out what’s going on, only to come upon the aftermath of a bloody, brutal battle. The outpost the signal originated from has been taken over by unknown forces, and it becomes horribly clear that the mighty team of warriors, including main protagonist Brother Proteus (Sean Pertwee), have walked into a trap. With their backs against the wall and death closing in, Proteus and his fellow teammates make a desperate last stand for survival, while trying to find out the reason why the distress signal was sent. 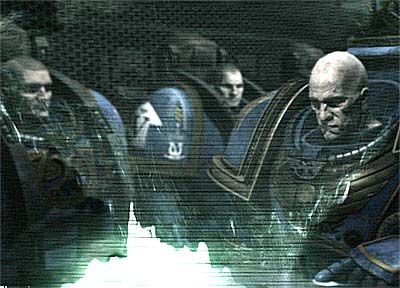 Made by UK studio Codex Pictures, the movie is a brutal, yet fun treat for both fans of the Warhammer 40K mythos and newcomers alike. It provides mildly complex, yet engaging storytelling that respects the source material it comes from, while giving explanations about the various types of characters and characters for people who, know little to nothing about the shared universe of books and table-top games the movie’s set in. In short, despite me being a Warhammer 40K newcomer, myself, I had fun with the movie and understood who everyone was and what was going on. The voice acting, despite mostly consisting of complete unknowns, was top-notch, with the 3 lead actors being the best out of all of them (the third actor, by the way, being John Hurt, who plays a surviving Marine that helps the group in their attempt to get back to their ship later on in the movie).

Overall, “Ultramarines” can be considered a worth addition to anyone’s DVD collection. If you are a fan of science fiction, action, or even a fan the Warhammer 40,000 mythology, it’s worth buying. The only way you can get it is in a 2-Disk Collector’s Edition DVD through the film’s official website, UltramarinesTheMovie.com for only $40 in the US (it’s also available on the site in the UK, Europe, and other countries). It may be pricy, but you won’t regret picking up this awesome movie!