Ask you and you shall receive. While I was happy to see multiple documents pop up on the Apollo 18 Cosmonauts subpage, one of things I was really looking for were dates. In the newest document discovered today (again by Alex Rivero), we get just that. Take a look for yourself after the break. 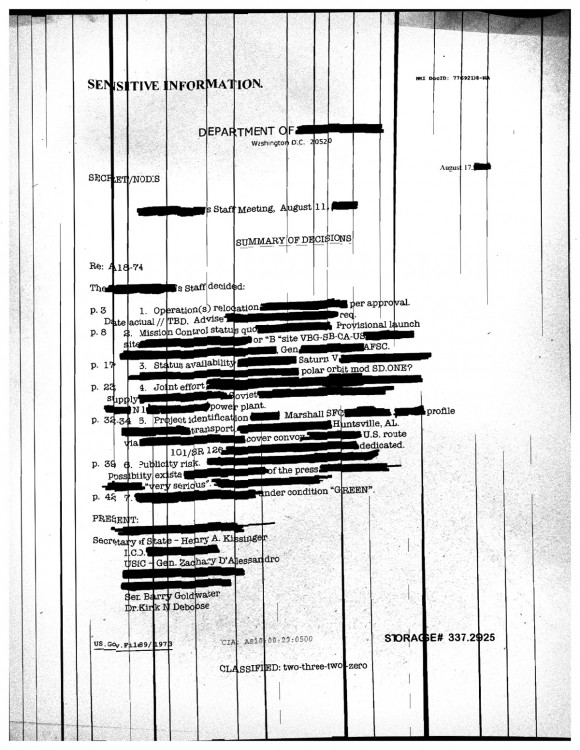 The meeting looks to have been about hashing out the details of the new mission. Like usual, most of the interesting stuff is redacted, so there’s not much to go on in terms of specifics, but we can at least make out some general concepts. As of this meeting, it doesn’t look like an actual launch date has been set, though the launch site has been moved (1) to Vandenberg Air Force Base in Santa Barbara (2). The availability of Saturn V, the rocketship used in all the previous moon missions, seems to be a factor in the launch date (3). NASA is working with the Soviets on this, so they must know what’s going on (4). They need to transport something big and secret from the Marshall Space Flight Center in Alabama to the Santa Barbara site (5). Considering MSFC is NASA’s original home and hub for all things space travel, it’s hard to say what that big thing is (it could even be the Saturn V itself). They are concerned about the public getting wind of this, as it could be very dangerous (6).

This sounds like a nice breakdown of events, but anyone with historical knowledge of the Apollo missions could have probably guessed most of that. What’s really interesting is the people who attended the meeting, listed at the bottom: Secretary of State Henry Kissinger, Someone with the prefix ICO, USSC General Zachary D’Alessandro, Senator Barry Goldwater, and Dr. Kirk N Deboose.

Kissinger’s title messes with my timeline a bit, as he didn’t become Secretary of State until September 22, 1973. I can’t figure out what an ICO is, and there are a lot of acronyms that use it. D’Alessandro appears to be a fictional character, and if he’s government, then he must be part of the United States Sentencing Commission, though what he’s doing at this meeting is unclear. Goldwater was Senator of Arizona in 1973 and ’74 (and much longer) and specialized in defense policy, which might explain his presence at the meeting. This Dr. Deboose (fictional character) is possibly the most interesting name on the list. Why do they need a doctor to sit in on a meeting about prepping a launch? And what kind of doctor is he?

Let us know your thoughts on this new document in the comments below. Hopefully this leak in NASA isn’t plugged any time soon.