NBC’s Hero Behind The Cape Contest

NBC has been one of the television networks at the forefront of interactive marketing and social media. Thus, it should come to no surprise that their contest for the upcoming superhero show The Cape utilizes both Foursquare and Twitter, along with some outdoor viral. Get the details on how you can win a New York dinner for two or even an iPad.

For the “Hero Behind The Cape” contest, which started on Wednesday and goes through Sunday (1/9), NBC teamed up with the New York City Department of Parks to put custom capes on statues of historical heroes. By checking in at the location of a statue, tweeting a picture of themselves with the statue with the hashtag #herobehindthecapeswps or by direct messaging the official Twitter account, fans can enter themselves into the drawing for the grand prize. What is this prize? The grand prize winner will receive the full “Hero” treatment in New York City: a luxurious dinner for two, limo service, two tickets to the taping of an NBC audience show and an Apple iPad. Also, one winner is picked per day to win an iPad. Not too shabby.

You can get full details on the official website, HeroBehindTheCape.com, and below is the entire official press release, along some pictures of the statues. 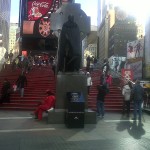 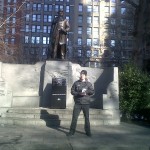 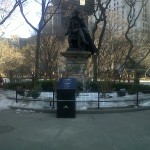 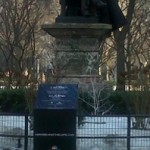 UNIVERSAL CITY, Calif. – January 5, 2011 – NBC will introduce a new superhero this month with the premiere of the drama series “The Cape,” and in anticipation of the show’s two-hour premiere on Sunday, January 9 (9-11 p.m. ET), NBC will partner with the New York City Department of Parks and Recreation for a unique campaign to highlight historic statues all over the city.

Beginning Wednesday, January 5 through Sunday, January 9, 30 of New York City’s historic statues will be outfitted with custom capes along with a plaque describing each hero’s greatest achievement and the similarities between the character traits of the star of “The Cape” Vince Faraday (David Lyons).

The statues range from a Revolutionary War hero who was the nation’s first President, to the leader in the fight for Cuban independence and to the world’s greatest playwright, New York City is home to a plethora of monuments and statues that pay homage to many great heroes.

Statue visitors will also be able to enter the “Hero Behind the Cape” giveaway contest using FourSquare and Twitter.

Statues and locations include such heroes as George Washington in Union Square Park and Brooklyn, William Shakespeare in Central Park, Benjamin Franklin Downtown and Eleanor Roosevelt on the Upper West Side. For all locations of the ‘caped’ statues and official rules of the sweepstakes, which will last the entire duration of the promotion (January 5-9), go to www.herobehindthecape.com.

“We are really honored to partner with the New York City Department of Parks and Recreation for this unique opportunity,” said Adam Stotsky, President, NBC Marketing. “There is no bigger stage than New York City, which is home to dozens of statues honoring some of the most accomplished men and women in history. We wanted to introduce New Yorkers to the latest hero hitting the small screen – ‘The Cape’s’ Vince Faraday – and pay homage to the heroes behind the City’s historic statues.”

“This sponsorship will benefit the preservation of New York’s collection of public art in the parks while drawing new audiences to them,” said Vickie Karp, Director of Public Information for New York City Parks & Recreation. “The new NBC series is a novel way to remind even the most jaded New Yorker that heroes are all around us.”

Participants can enter the sweepstakes by visiting any one of the 30 caped statues all over New York City and checking in via their FourSquare account. Also, visitors can enter by taking a photo of themselves at any of the statue locations and posting their photo to Twitter. Users will simply need to direct message the official Twitter handle (www.twitter.com/NBCTheCape) or use the hashtag #herobehindthecapeswps when they post their picture.

One winner will be chosen each day as the “Hero a Day” from all the daily entries between January 5-9 and each will receive an Apple iPad. The grand-prize winner will receive the ultimate New York City “Hero” treatment including a luxurious dinner for two, limo service, two tickets to the taping of an NBC audience show and an Apple iPad.

From the producing team of Gail Berman and Lloyd Braun comes “The Cape,” about a man who lost everything — and is about to take it all back.

Lyons (“ER”) stars as Vince Faraday, a cop framed for crimes he did not commit, forcing him to team up with a group of carnival misfits to take a new identity, fight crime and win his family back. Fueled by a desire to reunite with his wife, Dana (Jennifer Ferrin, “Life on Mars”) and son, Trip (Ryan Wynott, “Flash Forward”), Faraday becomes “The Cape” — his son’s favorite comic book superhero — taking the law into his own hands and battling the criminal forces that have overtaken Palm City.

Rounding out the cast are James Frain (“True Blood,” “The Tudors”) as billionaire Peter Fleming — The Cape’s nemesis — who moonlights as the twisted killer, Chess; Keith David (“Death at A Funeral”) as Max Malini, the ringleader of a circus gang of bank robbers who mentors Faraday and trains him to be The Cape; Summer Glau (“Terminator: The Sarah Connor Chronicles”) as Orwell, an investigative blogger who wages war on crime and corruption in Palm City.

Also starring are Dorian Missick (“Six Degrees”) as Marty Voyt, a former police detective and friend to Faraday; Martin Klebba (“Pirates of the Caribbean”) as Rollo, member and unassuming muscle of the circus gang of bank robbers and Vinnie Jones (“Lock, Stock and Two Smoking Barrels”) as Scales, resident thug and cohort of Chess, The Cape’s nemesis.

“The Cape” is a Universal Media Studios and BermanBraun production from executive producer/creator Tom Wheeler (“Empire”), along with executive producers Berman and Braun, John Wirth (“Terminator: The Sarah Connor Chronicles”), and Gene Stein (“Accidentally On Purpose”).