You may not know actor Neil Brown Jr. by name, but you probably recognize him from AMC’s new hit series The Walking Dead. In two episodes from the show’s first season, Brown plays Guillermo, the leader of a gang that turn out to just be a group protecting a nursing home from the zombie apocalypse. You’ll next see him in Battle: Los Angeles as Corporal Guerrero, part of a Marine platoon that is sent into Los Angeles to rescue civilians during an alien invasion. We talk to Brown about both projects, how his unique background fits into his recent roles, and the special meaning filming The Walking Dead had for him. Listen to the interview after the break.

0:20 How does it feel to be in two big projects in such a short timespan?
0:54 Did you know The Walking Dead would become such a huge hit while you were filming?
1:54 Did you ever read the comics?
2:36 What was it like to work on a zombie TV show?
4:40 What’s it like to do two intense projects within a short period?
5:26 What was the atmosphere/mood on set for both projects?
6:49 What’s it like to work on a war film when your father was a Marine?
9:00 Talking about bootcamp for BLA and the realism of the film
13:00 How does martial arts background help you with your two recent roles?
14:48 Talking about the Zombie Survival Crew 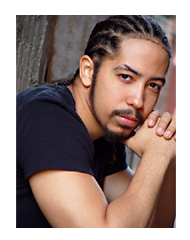 16:20 Twitter questions. First, Did you use anyone as inspiration for Guillermo?
16:55 What would you say if your kids wanted to go into acting? (Brown has two children with his wife Catrina)
17:35 Have you considered going into the military like your dad? He was planning to, but interesting story about why he didn’t.
19:18 What’s the coolest weapon you’ve ever used on or off the set?
20:37 What’s your favorite character to role?
21:40 Talks about working with Denzel Washington in “Out of Time”, including Denzel’s surprising inspirations
22:44 Did you have any nightmares or gross out moments while filming The Walking Dead? Brown tells a touching story about his unique experience filming the show.
26:00 What genre would you like to act in still?
27:07 Talk about Comic-Con and viral marketing, and how Brown’s a gamer.
29:21 Will Guillermo be back for Season 2 of The Walking Dead? Cryptic answer.