Recently the updates to the Super 8 viral campaign have been regarding that Super Bowl TV Spot which has been giving us secret images. Now, however, we have an actual update to our primary viral website that includes a new website (something we haven’t seen in a while). Get the details after the break.

The website Scariest Thing I Ever Saw has been the source of most of narrative for this ARG. It’s a remote desktop of an old PDP-11 computer, and it belongs to one of the two main characters in this pre-film story, either Josh Minker, fish enthusiast, or the mystery man dubbed Mysterio, who is giving Josh info on his father. Apparently daddy was into some top secret military stuff and some of his things left in Josh’s possession could be be important.

In the Photos folder on the computer’s desktop, there is a new image titled “FFSHCom” that shows a handwritten note with some weird markings on it. The password is “toadfish112” like usual (see how we got that password here), and when you click on the image to view it in higher res, use that for the username and password. 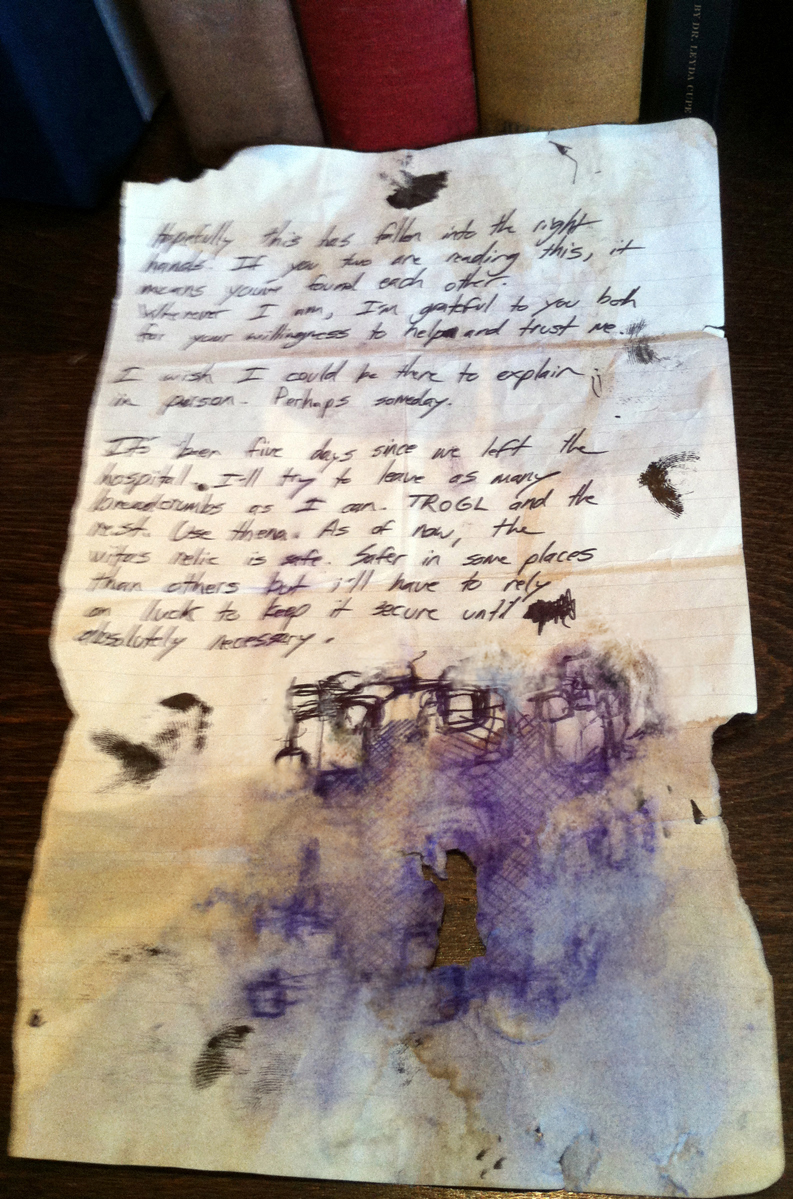 Thanks to Super 8 News, here is the writing on the note in text:

Hopefully this has fallen into the right
hands. If you two are reading this, it
means you’ve found each other.
Wherever I am, I’m grateful to you both
for your willingness to help and trust me.

I wish I could be there to explain
in person. Perhaps someday.

It’s been five days since we left the
hospital. I’ll try to leave as many
breadcrumbs as I can. TROGL and the
rest. Use them. As of now, the
vitas relic is safe. Safer in some places
than others but i’ll have to rely
on luck to keep it secure until
absolutely necessary.

This is the third time we’ve see the word TROGL written on something relating to Josh’s father (dad’s military badge and a book), though the meaning is still a complete mystery. There seems to be some kind of schematic handwritten on the bottom of the note that has been badly damaged by a liquid. Could this be a note from Josh’s father talking about Josh and Mysterio meeting?

If you look at the books behind the note in the picture, the spine of one on the right says “By Dr. Leyda Cupe”. A quick Google search brings up the wordpress website Revalistic, which talks about Cupe in regards to those massive bird deaths a few months back. In fact, most of the posts (there’s only a few) deal with that event, though the last one talks about Area 51 (a location that does play a role in the film and possibly the ARG). The site looks fake to me, and all the registry info on it is hidden, so I’m assuming this site is part of the viral. I’m questionable on the sites that Revalistic links to, but I won’t go so far as to say they are officially part of it. Not yet, anyway.

Catch up with the Super 8 ARG and learn more about the film itself by checking out our Super 8 Viral Page.