Super 8: More Theories From The Trailer

Since we’ve seen the first feature length trailer for J.J. Abrams’ Super 8 (which is now available in HD on Apple.com), the internetz have been hard at work dissecting it for any clues. We’ve shown you a few things we noticed, but now there are more theories regarding what we saw. Take a look after the break.

We may have the official synopsis for the sci-fi film about a small town dealing with an extraordinary force, there is still plenty of mystery to be solved, including what that force really is. Thanks to the new viral website and other clues, we know it’s extraterrestrial in nature.

Latino Review has an interesting theory that the cubed object we see in the trailer and various pictures from the viral campaign may in fact be the extraterrestial force itself. They have a pretty detailed explanation of what I would call the Flubber Theory, but I don’t buy it. With Spielberg producing and Abrams also writing the picture, I can’t see those guys coming together to make a movie about a piece of metal (or whatever material it is). That would be a huge let down, considering the build up. Also, how could it do all that destruction, including pulling a full grown man across a grocery store floor? To me, the object is just a piece of the puzzle to finding the monster/alien/entity and learning about their technology that brought them to Earth.

Another theory I’ve been loosely hearing is how the town’s water tower plays a key part in the film. There’s a good chance this is true, since the tower is featured in both the new poster and the trailer (screencaps below). We see cars levitating in its general direction near the end of the trailer, and there’s a model of it on the main character’s room (where we also see the Quasimodo doll) There’s even a quick shot of the tower in the hole made by Flubber. Could this be where the thing is hiding out? What’s interesting is that in earlier daytime shots, the tower is not there. Is this an editing error, or could the thing be moving the tower? That’d be impressive. We may see more about this water tower as the viral campaign moves on, so we’ll keep an eye out. 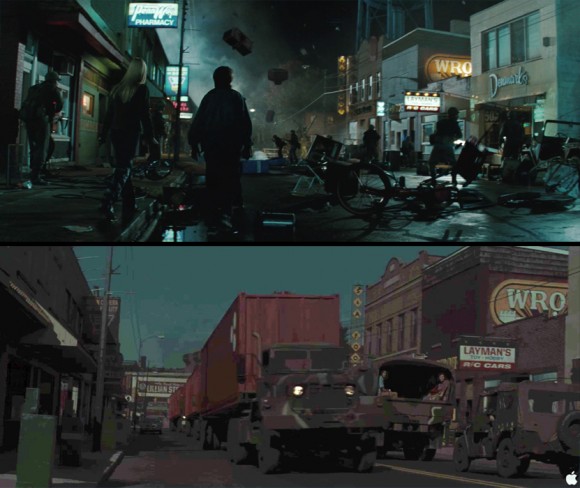 Those are the big theories so far, but I’ve seen a few more smaller ones thanks to Unfiction. Remember that shot from the trailer of the Lost Dog bulletin board with “Coop” on it? Well, look at the main character’s own poster and his probable name is revealed: Joe Lamb (via avr1991). We also have a phone number with no area code, 165-4211, that could be used later in the campaign.

We have some more viral connections as well. Unfiction member connects the dog “Sookie” from the bulletin board to a previous viral image that talks about the dog. Also, a badge on Joe’s wall near the Plastic Man comic looks Rocket Poppeteer-ish, but it’s really a badge for Apollo 14.

There a lot of other cool findings and theories on the Unfiction thread, so check it out. As always, if we find anything noteworthy, we’ll bring you the update. For more information on Super 8 and its viral campaign, reference our Super 8 Viral Page.