Yesterday we told you about the viral website for Disney’s robot-boxing movie Real Steel. Now the site has been updated to include some viral videos and photos. Get the details after the break.

World Robot Boxing is the official robot boxing league portrayed in the film. On the site, you can see a bit about the league’s background through five “rounds” that need codes. We now have all the codes that open up Round 1, courtesy of Genre Addict, which are below.

Round 1 talks about how the Koma Club in Tokyo is where robot boxing started, thanks to Kizu, the engineer and Raiden, who seems to have done the rest. The two went separate ways ways because of “ideology”.

Round 2 is opened up through code a1b34cd23. Billionaire Nate Matheson announced his creation of the WRB in 2013, and through his audio comments on the sight, he seems to be driven by money and promotion more than anything. The league was set to go live on July 23rd, 2014. There’s also a chart that shows that robot boxing in general started in 2011.

Round 3 is accessed by code 3eba21a4e. Kizu’s second generation of fight-bot is called “Gamma”, which evolves the sport even further. We also see a bunch of stats about how crazy popular the new sport is.

Round 4 has the password bd3b1a2e4. By 2016 there is a power struggle when the Russians storm the league. The Lemkovas created the Rubicon fight-bot, who beats out Gamma for the title, although Noisy Boy is a contender. Noisy Boy was created by Tak Mashido, and is voice controlled by only his voice to avoid noise problems and hacking. We also get a quick glimpse of Noisy Boy in action, as seen in the video below.

Round 5, the final round, is opened by code 3cbec3d4b. It is now 2018, and Mighty Zeus beats out reigning champ Armageddon for the title. Interestingly, Zeus is actually a joint creation of Mashido and the Lemkovas, who made a truce for millions of dollars even though Noisy Boy was decimated by Rubicon. Also, Mashido is concerned to be the world’s greatest living designer. Below is a short video featuring Zeus, as well as some of images taken from the site. 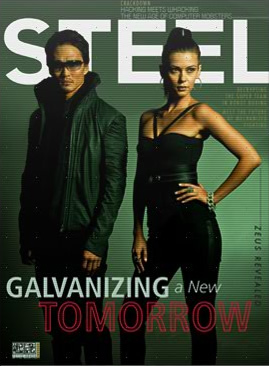 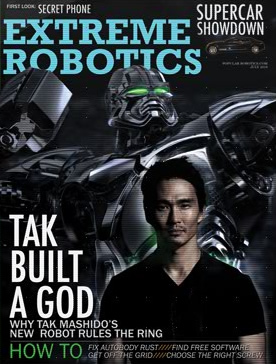 Thanks again to Genre Addict as a resource, and in case you were wondering where those codes came from, just look at the top of each round’s first window.

Real Steel is directed by Shawn Levy and written by John Gatins from the short story “Steel” by Richard Matheson (namesake of WRB founder Nate). The film stars Hugh Jackman and LOST’s Evangeline Lilly and is set to open in theaters on October 7th.