I’m split on director Zack Snyder, whose short but starry resume includes films I’ve liked (Dawn of the Dead, Watchmen), some I haven’t (300), and an upcoming one I pray he doesn’t mess up (Superman: Man of Steel). I was greatly anticipating his latest project Sucker Punch (out today in theaters and IMAX), as I thought it would give me closure on his ability to do the greatest superhero justice. Unfortunately, I came out of the theater just as divided as I came in.


WARNING: THIS REVIEW MAY CONTAIN MINOR SPOILERS. READ AT YOUR OWN DISCRETION.

Warner Bros.’ Sucker Punch is about a 20 year old girl (Emily Browning) who gets put into an insane asylum during the 1950s by her abusive stepfather (Gerard Plunkett), who is out to get her recently deceased mother’s money. The stepfather has paid off the head orderly Blue Jones (Oscar Isaac) to have the girl get a lobotomy. In order to try to escape, the girl goes into a fantasy world that mirrors the situation she’s in, where her and some of the other inmates are now orphans-turned-prostitutes and burlesque dancers. Here, Jones is the boss, and psychologist Dr. Vera Gorski (Carla Gugino) is now the choreographer for the show. The orphan girls only go by nicknames the entire film, with Baby Doll leading the team of Sweet Pea (Abbie Cornish), her little sister Rocket (Jena Malone), Blondie (Vanessa Hudgens), and Amber (Jamie Chung), on an escape from this fantasy prison and the ominous High Roller (Jon Hamm) through Baby Doll’s ability to mesmerize men with her dancing. Oh yeah, and she goes into yet another dream world when she dances, only here the girls are a much hotter version of the A-Team fighting a war against enemies that include steam punk zombie soldiers, dragons, and robots.

If that explanation was too confusing for you, then stay home. The film’s storyline goes much deeper, and though we fortunately don’t get stuck in an Inception-like rollercoaster of realities, I definitely had a hard time keeping up at first. Even when they loosely explain how everything fits together at the end, your head will still be reeling. This was my biggest concern going in, as I barely knew what the movie was about, and after chatting people up the past few days, I knew I was not alone. 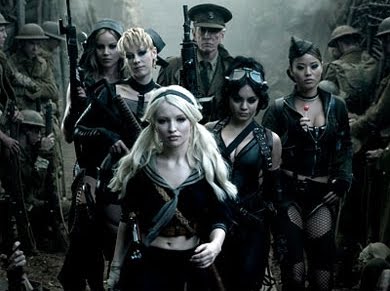 What you all want to know, however, is probably how “awesome” the movie is. Yes, there is plenty of action, but it has that Frank Miller stylized look that feels old now: high speed slick action mixed with slow motion accentuations in a fully computer generated world. At first it’s impressive and heart pumping, but then it repeats itself and becomes numbing, especially since you know that dream sequences aren’t real, so there’s nothing at stake. What matters is what’s happening in the brothel, and even that is hard to care about since it’s ALSO a fantasy world. There’s only so much no-consequences CG fighting I can watch before I get bored.

The other thing you’re interested in is the characters, if not just because of their sun-level hotness. The girls are truly stunning, especially Browning, who shines through despite a startling small amount of dialogue. While they might be nice to look at (as is Gugino as “Madam” Gorski), we never get to know them very well, thanks in part to large chunks of action sequences and mostly only plot-driven dialogue. Even with the extensive background of Baby Doll revealed early on, the character remains a mystery through out. Despite this, I was captivated by the girls, and I found the rest of the cast, which included Scott Glenn as the commandos’ leader, fit really well in their sometimes dual roles.

Don’t get me wrong, this is a fun film that twists and turns enough to make it seem like it means something. The combat-oriented fantasy scenes are beautiful, especially in IMAX, and the trench warfare from the girls’ first commando mission kicks ass. Snyder knows how to film action. Also, the film is rather smart in how it handles the worlds and the characters: The nicknames to keep some mystery, the parallels in storyline between all the worlds and the small details connecting them (including several that I’m sure I missed).

I’m still on the fence, however, about whether or not I like the twist ending, which almost seems to be trying to make up for some of the criticisms I’ve given. Watching it again might help, but I also felt like there were some loose ends that deserved explaining, and I was more confused at the end than I was in the middle.

Underwhelmed. While action and beauty abound, an overly complex storyline and underdeveloped characters do as well. With long action sequences that had little to no meaning to the real world, I often wanted to actually see Baby Doll dance instead of the fighting inside her head. We get everything the trailers promised, but not much more.